While this headline may say “Little Rock Look Back,” Lottie Shackelford is still very much focused on the present and the future!

In January 1987, Shackelford became the first female mayor of Little Rock when she was chosen by her colleagues on the City Board to serve in that position. She was Mayor until December 1988.

On April 28, 1758, future U.S. President James Monroe was born in Virginia.  It was during his Presidency that Arkansas was surveyed and platted. Little Rock was also officially settled during the Monroe Presidency.  The Quapaw Line was drawn during his presidency. This document was the first official document to use the name “Little Rock” to describe this settlement.

Monroe was the last president who was a Founding Father.  A soldier in the Revolutionary War, he studied law under Thomas Jefferson and served as a delegate in the Continental Congress.  Although he felt the new Constitution gave too much power to a central government, Monroe served in the first US Senate before serving as Governor of Virginia.  As a diplomat, he helped negotiate the Louisiana Purchase.

He was easily elected president in 1816.  During his first term in office, the US acquired Florida from the Spanish and jointly occupied Oregon with the British. He was the first president to preside over land from the Atlantic to the Pacific.  Because of successes abroad (including the Monroe Doctrine) and domestically, the Monroe Presidency was known as the “Era of Good Feeling.”

Following his retirement in 1825, Monroe was plagued by financial difficulties. He died in New York City on July 4, 1831.

Monroe Street in Little Rock is named after him.

On April 28, 1784, in Virginia, future Little Rock Alderman (and acting Mayor) Major Nicholas Peay was born the eleventh of at least thirteen children.  (His gravestone lists a May date for his birth, but all other records indicate April 28, 1784.) A veteran of the War of 1812 and the Indian Wars, he later moved to Kentucky (where he met and married his wife, Juliet Neill, in 1814) before settling in Arkansas on September 18, 1825.  At the time, they were the ninth family to set up residence in Little Rock.

After arriving in Little Rock, he bought the Little Rock Tavern. This started a fifty year tradition of his family owning taverns and hotels in Little Rock. In 1828, he was appointed Assistant Postmaster of Little Rock.  From 1825 to 1831, Little Rock residents were allowed to elect five Trustees prior to the formal incorporation. Major Peay was one of those who served on the Board of Trustees.

He later served on the Little Rock City Council, and in 1839 served for seven months as Acting Mayor due to the prolonged absence of Mayor Jesse Brown.  In 1841, his friend Gen. Zachary Taylor, paid a visit to Little Rock and stayed with him on the General’s way to Fort Smith.

Nicholas and Juliet Peay had at least eleven children, though only five appeared to have lived until adulthood. One of those, Gordon Neill Peay, served as Little Rock’s 23rd Mayor from 1859 to 1861. Other descendants of Nicholas Peay who followed him into public service include his grandson Ashley Peay, who was an Alderman in the 1920s (son of John Coleman Peay) and great-great-grandson Joseph B. Hurst (a great-grandson of Mayor Peay), who was a City Director from 1967 to 1970. In addition, City Director Hurst’s daughter-in-law, Stacy Hurst served three terms on the City Board from 2003 to 2014; she is now Director of the Department of Arkansas Heritage.

Major Peay’s egg-nog recipe has been passed down for generations. It is the inspiration for the Historic Arkansas Museum yearly Nog-Off.  This past year, museum director Bill Worthen and his daughter were the sixth and seventh generation of the family to make Peay’s egg-nog. The Worthens are descended from Mayor Peay’s son who was also named Gordon Neill Peay.

Major Nicholas Peay is buried with his wife and many other family members in Mount Holly Cemetery.

The Smithsonian Institution records indicate they have an oil painting of Major Peay as well as of his wife. But there are conflicting records as to whether they have been lost or are in private collections. 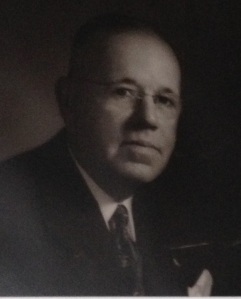 Wassell ran for Mayor in 1947 and was unopposed in the general election.  He was unopposed in his bid for re-election in 1949.  During his second term, President Harry S. Truman visited Little Rock.  In 1951, he sought a third term as Mayor.  No Little Rock Mayor had been successful in achieving a third consecutive term since 1923.  Though he received the Democratic nomination, the Republican party nominated Pratt Remmel who defeated Wassell by a 2 to 1 margin.

With a new USS Little Rock nearing commissioning, it is interesting to note that Mrs. Sam Wassell christened the previous USS Little Rock in 1944.  At the time, she was a City Councilor’s wife.

April 23, 1892, marked the beginning of the City of Little Rock’s public park system.  On that date, the City officially took possession of land which would become what is now known as MacArthur Park.

The park land had originally served as a horse racetrack in the early days of Little Rock.  By 1836, the federal government purchased the land for construction of a military arsenal.  The flagship building, the Arsenal Tower building, is the only remaining structure from that time period.

The land served as a military outpost until 1892.  On April 23, 1892, a land swap took place where in the City of Little Rock was given the property with the stipulation that it would be “forever exclusively devoted to the uses and purposes of a public park.” (Never mind that the federal government took part of the land back for the construction of the Wilbur Mills Freeway.)  In return for giving the City this land, the federal government took possession of land on the north side of the Arkansas River (then part of Little Rock) – that 1,000 acres became Fort Logan H. Roots.

After clearing most of the buildings from the land and preparing it for recreation, the park opened on July 4, 1893, with the name Arsenal Park. Since it was the City’s first and only park at the time, residents started referring to it as City Park. In time, the designation Arsenal Park fell from use.  In fact, it is referred to as City Park exclusively and officially in City documents throughout the first 42 years of the 20th Century.

The City Council’s action to name it MacArthur Park in March 1942, was accompanied by petitions encouraging the action which were submitted by the Arkansas Authors and Composers Society, the Arkansas Engineers Club and the Pulaski County Republican Central Committee.

City records do not indicate if anyone registered opposition to the name change. It would be another decade before General MacArthur would return to the site of his birth, a place he had not visited since his infancy.

Stephen Shachtman was named as the recipient of a $60,000 commission on Sunday at the conclusion of the 2017 Sculpture at the River Market.  His sixteen foot sculpture composed of CorTen steel, bronze and slate is entitled “A.”  It will be placed at the Southwest Community Center (6401 West Baseline Road) in 2018.

Shachtman’s sculpture captures the varied activities of the Southwest Community Center site.  The convergence of these functions is represented by the central sphere which represents the community coming together.  The layers of the sandstone in the sphere reflect the variety of people who make up the community.  The steel and bronze portion of the “A” represents Arkansas.

It will be fabricated in CorTen steel with a bronze cap at the point of each pillar.  The tallest form measures approximately sixteen (16) feet high.  The overall footprint will be approximately ten (10) feet in diameter.

Sculptors who were juried in to participate in the 2016 Show and Sale were invited to submit proposals for the new commission. A committee reviewed the 29 submissions and narrowed them down to seven semi-finalists. The semi-finalist proposals were on display Friday, April 21, during the preview party. Guests at the party had the opportunity to review the proposals and then to vote. Following that, the three finalists were announced.  In addition to Shachtman, the other finalists were Jack Hill and Ted Schaal.  A panel of judges selected the winner from the three finalists.

City Director Dean Kumpuris, one of the founders of Sculpture at the River Market discussed the location selection.  “Over the past few years we have started placing sculpture throughout Little Rock.  When thinking about the location for the installation in 2018, the Southwest Community Center immediately came to mind.”

“Not only is there an active community center at that location,” he continued, “it is also home to the Police Department’s Southwest precinct.  The Dee Brown branch of CALS is located there and just recently expanded.  In addition to an office of the County Health Department, Arkansas Children’s Hospital is building a clinic out there.  This collection of recreational, educational, safety, and health resources makes this location an important spot not only for Southwest Little Rock, but all Little Rock.”

Shacthman’s “A” will join six other sculptures that have been recognized previously with the commissions through the Sculpture at the River Market’s Public Art Monument Sculpture Competition.

*       The 2011 winner was Chapel, whose work The Center was installed near the Junction Bridge.

*       In 2012 the recipient was Bryan Massey’s Nautilus. This was installed to the north of the Marriott Hotel near the new children’s spray fountain.

*       The 2013 winner was Ted Schaal for his piece Open Window which was placed near the La Petite Roche plaza and First Security Amphitheatre.

*       Lorri Acott’s Peace was the 2014 commission winner; it is sited at the southeast corner of Main and 2nd Streets.

*       Michael Warrick’s Mockingbird Tree, the 2015 winner, is installed at the corner of Chenal Parkway and Chenal Valley Drive.

*        Clay Enoch’s United, which won in 2016, will be installed at Central High School in September 2017 as part of the activities to commemorate the 60th anniversary of the integration of that school

The winner of a $60,000 commission to place a sculpture at the Southwest Community Center in 2018 will be announced on Sunday, April 23, 2017, as the 10th Sculpture at the River Market Show and Sale concludes.

Sculpture at the River Market invited all artists participating in the 2017 Show & Sale to submit a proposal for its $60,000 Public Monument Competition. This is the seventh such competition in the ten years of the Show & Sale.

Of the 50 artists in the 2017 Show & Sale, 29 artists submitted a proposal.  The proposals of the seven semifinalists were displayed during the event’s Preview Party on the evening of April 21, and Preview Party guests voted for their 1st, 2nd and 3rd choice.  All votes were tallied and the top three finalists were announced at the end of the evening.

The top three proposals will be juried on April 22 and 23, and the 2017 winner will be announced at 3PM on Sunday, April 23.  The winner will be installed at the Southwest Community Center in 2018.

More information is available on the web at http://sculptureattherivermarket.com/.