James L. “Skip” Rutherford III, Dean of the University of Arkansas Clinton School of Public Service, was inducted into the Arkansas Boys State Hall of Fame on Friday. The induction ceremony was held on the University of Central Arkansas campus in Conway, Ark.

Founded in 1935, Boys State is among the most respected and selective educational programs of government instruction for U.S. high school students. Boys State is a participatory program in which students become part of the operation of local, county, and state government.

Rutherford attended Boys State in the summer of 1967, between his junior and senior years of high school. He grew up in Batesville and graduated from Batesville High School in 1968. He went on to attend the University of Arkansas, Fayetteville, where he became editor of the Arkansas Traveler newspaper during his senior year. 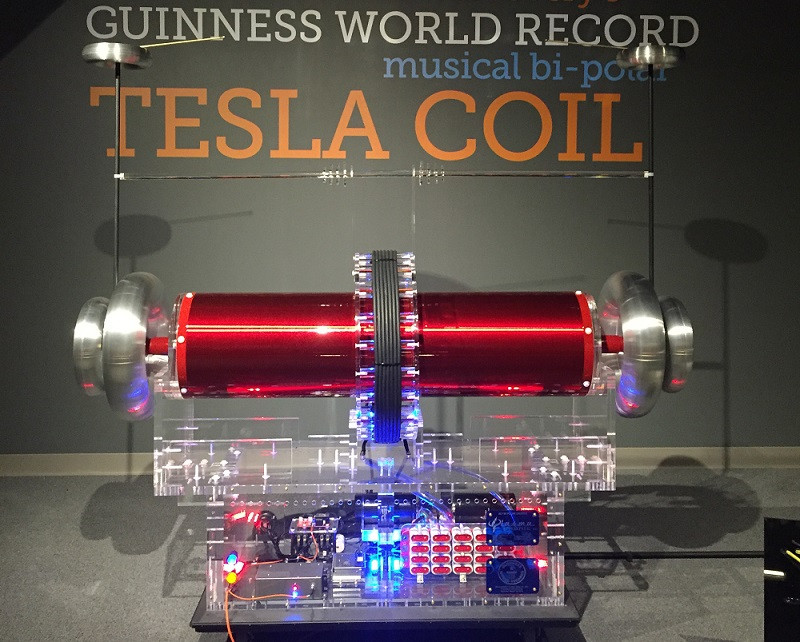 Little Rock’s Museum of Discovery announced today that its guests can now enjoy the science center’s Guinness World Record musical bi-polar Tesla coil shows for free thanks to financial support from Entergy Arkansas.
The museum’s Tesla coil – named after its inventor, Nikola Tesla, the developer of the alternating current system of electricity used today – emits up to 200,000 volts of electricity visible to the eye. By changing the frequency of the release of plasma, or lightning, the coil can also play music. In 2017, Entergy became the presenting sponsor of the Tesla coil theater and is continuing its support by providing museum guests free admission to Tesla shows.
“We at Entergy hope that the Tesla show will inspire Museum of Discovery guests to learn more about science, technology, engineering and math,” said Laura Landreaux, president and CEO of Entergy Arkansas. “It’s important to us to help inspire the scientists and inventors of tomorrow to power life here in Arkansas and beyond.”
The Museum of Discovery’s coil is one of two world record musical bi-polar Tesla coils; the other is housed at the Hands On! Regional Museum in Johnson City, TN.
“Our Tesla coil is one of the iconic exhibits at the Museum of Discovery, and we are so happy to now be able to offer our very engaging Tesla show to guests at no cost,” says Kelley Bass, museum CEO. “Entergy long has been a generous supporter and great partner for our museum, and it’s gratifying that Entergy’s commitment now will pay off directly for our museum guests.”
Free Tesla shows will be offered several times a day at Museum of Discovery. For more information, visit http://www.museumofdiscovery.org or call 501-396-7050.
About Museum of Discovery
Founded in 1927, Museum of Discovery is the state’s oldest museum. Its mission is to ignite and fuel a passion for science, technology, engineering, arts and math through dynamic, interactive experiences. To learn more, visit museumofdiscovery.org.

Kick off the summer with the first screening in the CALS Ron Robinson Theater Rock & Reel film series: Dazed & Confused!

The screening starts at 7pm.  Admission is $5.

Richard Linklater’s coming-of-age film follows the mayhem of group of rowdy teenagers in Austin, Texas, celebrating the last day of high school in 1976.

The graduating class heads for a popular pool hall and joins an impromptu keg party, however star football player Randall “Pink” Floyd (Jason London) has promised to focus on the championship game and abstain from partying. Meanwhile, the incoming freshmen try to avoid being hazed by the seniors, most notably the sadistic bully Fred O’Bannion (Ben Affleck).

Joey Lauren Adams also stars in the movie. When the Culture Vulture first saw the movie he said in a too loud voice in the Missouri movie theatre where the late night screening was taking place, “Oh my God! I went to high school with her!”

As the Arkansas Arts Center prepares to transition out of its physical space in MacArthur Park this summer, it is a time to look back to another transition the AAC experienced 51 years ago. That one was not quite so exciting.

In January 1968, the Arkansas Arts Center made the decision to cease operating a degree-granting education program effective May 31 of that year.  Sixteen faculty members lost their jobs, though a couple were retained for other positions within the organization.

After opening in May 1963 and beginning the degree-granting program in September 1964, the Arkansas Arts Center found itself operating at a deficit each year.  While Jeannette and Winthrop Rockefeller made up the deficits, it was not a sustainable model.  (Mrs. Rockefeller had been the president of the AAC board for several years after she and her husband played leadership roles in the statewide fundraising efforts to establish the AAC.)

Though the degree-granting programs were bringing national recognition to the AAC, they had essentially taken over the entire facility.  The theatre was rarely available for children’s programming or community groups. The galleries were given over largely to the displaying the works of the students and faculty.  What had been envisioned as a facility melding world-class arts with community arts, was not functioning that way.

As such, the statewide membership program was suffering. Without the creation of programming in Little Rock, it was difficult to take any substantial arts offerings out to the membership clusters throughout the state. This resulted in the decline of memberships being purchased.

Following the announcement of the cessation of the degree-granting program, the AAC Board sought ways to more fully engage the public.  Part of this was due to the fact that the Arts Center had a deficit of $295,216 (the equivalent of $2.15 million today).  The only profitable part of the AAC operation was the gift shop.  With that level of deficit, the permanent closure of the AAC was certainly a possibility on people’s minds.

A committee studying the future of the AAC decided to focus on five (5) areas.  (And of course, AAC founding mother Jeane Hamilton was part of this effort.)  The areas were Education (community classes for children and adults), Exhibits (a return to a mix of permanent and traveling exhibitions), Theatre (partnerships with Community Theatre of Little Rock and the creation of children and teen theatre productions), State Services (refocusing the Artmobile to include educational instruction), and Membership. This would result in a net budget of $260,000.

One year after the landmark Brown v. Board decision which declared state laws establishing separate public schools for black and white students to be unconstitutional, the Supreme Court took up the case again.  This time the focus was on the implementation of desegregation

The original Brown v. Board grew out of a class action suit filed in Topeka, Kansas, by thirteen African American parents on behalf of their children.  The District Court had ruled in favor of the Board of Education, citing Plessy v. Ferguson.  When it was appealed to the Supreme Court, Brown v. Board was combined with four other cases from other jurisdictions.

After handing down the 1954 decision, the Supreme Court planned to hear arguments during the following court session regarding the implementation.  Because the Brown v. Board case was actually a compilation of several cases from different parts of the US, the Supreme Court was faced with crafting a ruling which would apply to a variety of situations.

In the arguments before the court in April 1955, the NAACP argued for immediate desegregation while the states argued for delays.

The unanimous decision, authored by Chief Justice Earl Warren, employed the now-famous (or infamous?) phrase that the states should desegregate “with all deliberate speed.”

In making the ruling, the US Supreme Court shifted the decision-making to local school districts and lower-level federal courts. The rationale was that those entities closest to the unique situation of each locality would be best equipped to handle the distinct needs of those schools and communities.

The Supreme Court did make it clear that all school systems must immediately starting moving toward racial desegregation.   But again failed to provide any guideposts as to what that meant.

In anticipation of the Supreme Court’s Brown II ruling, earlier in May the Little Rock School Board had adopted a draft of what became known as the “Blossom Plan” (named for the superintendent, Virgil Blossom).  The thought process seems to have been that if the LRSD had a plan in place prior to a Supreme Court decision, it might buy it more time had the court ruled that things had to happen immediately.

The Blossom Plan called for phased integration to start at the senior high level.  It anticipated the new Hall High School as having an attendance zone in addition to zones for Central and Mann high schools. But the way the zones were created, the only school which would be integrated at first would be Central High.  The junior highs and elementary schools would be integrated later.

With no immediate remedy from the US Supreme Court, the NAACP – both nationally and locally – had little recourse other than expressing their unhappiness continuing to verbally protest the lack of immediate desegregation. (This is an oversimplification of the NAACP efforts, but points out that their options were very limited.)

As reported earlier today (May 30), the new estimate for the Arkansas River crest in Little Rock is now expected on Wednesday, June 5 at 29 feet.

“At the current levels, coupled with the forecast from NOAA, we feel confident that none of the critical operating components of the stage, the seating area, the pit or the loading areas will be adversely affected by rising water at the time of the Judas Priest Concert on Saturday, June 1,” said Jim Rice, COO, Little Rock Convention and Visitors Bureau.

Based on the current situation and forecast, the concert will proceed as planned.

LRCVB operations will continue to monitor both NOAA reports and the venue daily and remain in close contact with the concert promoter so that if anything changes, ticketholders can be notified as quickly as possible.  Additionally, the media will be updated as well as our websites and social media postings.

The box office will open at 12pm on Saturday for concertgoers who prefer to purchase tickets upon arrival.  Gates will open at 5pm.  Show starts at 7:30pm. Fire and explosions…oh, and dancing. It’s like Pyro Prom.

PURCHASE TICKETS – This link will take you to a ticket purchasing calendar.  Select May 30 as the date and then choose Science After Dark admission.

Who says the Museum of Discovery is only for kids?!? Not the hundreds of 21-and-older science-and-fun lovers who attend Science After Dark each month. Because, science is fun … at any age!

Science After Dark provides visitors the opportunity to have fun and learn about science in a unique setting. Museum educators pick a science-related topic and build an entertaining, interactive evening around it. You never know what will sprout, pop, fizzle, or glow. We invite you to discover the science of having fun.

Museum partners are there to serve pizza, and a full bar from craft beer to wine to cocktails is available. And beyond the themed activities each month, Science After Dark admission ($5, free for members) includes access to all museum galleries and our 90-plus hands-on, interactive exhibits.