Tonight West Coast singer-songwriter Nedelle Torrisi will inaugurate a new, intimate performance space in downtown Little Rock called The Undercroft with an 8 p.m. show, as part of a tour in support of her recent self-titled release. The cover charge is $5 at the door. The space is on the campus of Christ Church; the entrance is through the sidewalk-level red door on Capitol Avenue east of Scott Street.

Nedelle Torrisi has recorded six albums both as a solo artist, previously under the single name Nedelle for the label Kill Rock Stars, and as a member the band Cryptacize (with former Deerhoof guitarist Chris Cohen). She has also spent time touring with Sufjan Stevens, who has said that “her voice carries the uncomplicated clarity of a 1950’s movie musical.” Nate Chinen, music critic for the New York Times, has also called her voice “guileless… an instrument of earnest pleasure and petition.”

As a songwriter, she combines a playful sense of language, often covering matters of the heart, with lilting, memorable melodies that swerve into unexpected places. On her latest, produced by Kenny Gilmore, who will join her for the show, she details the twisting trails of relationships that are rewarding but also shot through with melancholy, all wrapped in a glossy synth-pop package. In “Double Horizon,” she sings, “The cement has dried around my feet / No more dancing in the street/ But it can’t keep my heart from roaming.”

The new album, Nedelle Torrisi, is available on iTunes (along with a companion EP of solo piano versions of the songs). To stream it and read a recent interview with her in Rookie magazine, go to: http://rookiemag.com/2013/09/nedelle/

For information about the new performance space The Undercroft, contact Rev. Scott Walters at Christ Church at swalters@christchurchlr.org or 501-375-2342. 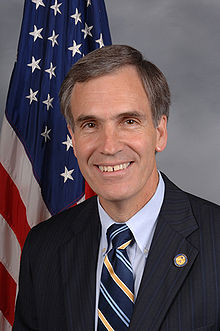 With government shutdown, debt ceiling limit, continuing resolutions and other congressional contentions becoming hot topics for the general public, the Clinton School is featuring a speaker tonight at 6pm who has been in the halls of Congress.  This evening Congressman Tom Allen speaks about his book Dangerous Convictions: What’s Really Wrong with the U.S. Congress.

In his book “Dangerous Convictions,” former Congressman Tom Allen argues that what’s really wrong with the U.S. Congress is the widening, hardening gap in world-views that leaves the two parties unable to understand how the other thinks about what people should do on their own and what they are able to do together.

Allen represented Maine’s 1st congressional district from 1997 to 2009.  He was first elected by defeating incumbent James Longley Jr.  In 2008, he challenged incumbent Senator Susan Collins and was defeated.  Since then he has served as president and CEO of the Association of American Publishers.

Prior to serving in congress he had been a member of the Portland City Council, served as Mayor of Portland and ran for Governor of Maine.

The program will take place at Sturgis Hall.

*Reserve your seats for both programs by emailing publicprograms@clintonschool.uasys.edu or calling 501-683-5239.

Kicking off the 2013-2014 season, Richard Rodgers and Lorenz Hart’s Pal Joey has been reimagined by Tony winner Peter Schneider.  He and Rep Producing Artistic Director Bob Hupp have assembled a stellar cast and creative team to bring this classic tale to a new life.  The Rodgers and Hart songs are woven into a new book by Patrick Pacheco based on the stories of John O’Hara.

Peter Schneider is the Tony Award-winning producer of the internationally acclaimed Broadway musical The Lion King. He produced the award-winning documentary, “Waking Sleeping Beauty,” about Disney animation from 1984-1994, a decade within his 17-year tenure at the company where he served as President of the animation department and, later, as Chairman of the studio.

A new score has been enhanced with other memorable songs from the Richard Rodgers and Lorenz Hart catalog, such as “The Lady Is a Tramp” and “Sing for Your Supper,” intermingled with gems from the original 1940 show like “Bewitched, Bothered and Bewildered” and “I Could Write a Book.” This Pal Joey explodes on stage with timeless jazz favorites, stunning tap dance numbers and plenty of sparkle while exploring morality, race, class and the timeless relationship between power and sex.

Performances today are at 2pm and 7pm.

On September 28, 1905, the first meeting of the Pulaski Heights City Council took place.  The newly elected Mayor was J. H. Joslyn, the Recorder was F. D. Leaming, and new Alderman present were E. E. Moss, Maxwell Coffir and C. C. Thompson.  Pulaski Heights had been incorporated on August 1, 1905.  At that time its population was estimated at between 300 and 400.

The first ordinance, which was offered by E. E. Moss, was to set a tax rate and give the City the ability to levy taxes.  Next was a motion to establish a committee to establish rules and procedures for the council. The final business before the Council was to allow the Recorder to order stationary, a seal and a record book (that record book is now in the vault at Little Rock City Hall).

The next meeting would be October 28.  At that meeting, two other Aldermen are mentioned in the minutes (Fauble and Paul) but were absent from that meeting as well.  Mr. C. M. Fauble was present at the third meeting.  Mr. R. O. Paul did not appear until the fifth meeting (December 13, 1905).

Interestingly the Recorder had a vote in the Council meetings (which was not a practice in the City of Little Rock at the time).

The Council did not have a permanent meeting place until the third meeting.  At that point in time, they used space in the offices of Dr. Hockersmith.

Pulaski Heights was a separate City until January 1916.  On January 4, 1916, Little Rock voters approved the annexation of Pulaski Heights by a ten-to-one margin, and the suburb became the city’s ninth ward. This established a couple of precedents for the City of Little Rock which are in effect to this day.  The first is that Little Rock would not be a central city surrounded by a variety of small incorporated towns (in the manner that St. Louis and other cities are).  It was this thought process which has led the City to continue to annex properties.

In addition, this move to annex Pulaski Heights was the first time that the City grew toward the west.  Previous growth had been to the south.  By emphasizing western expansion, this has allowed Little Rock to continue to grow.

The second annual Arkansas Sounds Music Festival continues today. The Saturday venue is the First Security Amphitheatre in Riverfront Park.   Arkansas Sounds Music Festival is a FREE event open to the public. Donations can be made to help support the festival.  Though it is free, and no tickets are issued, there are space limitations, so attendance is on a first come, first serve basis.

Born Floyd Elliot Wray on August 22, 1960 in De Queen, country artist Collin Raye was one of the true hit makers of the 1990’s. Collin still continues to crank out soulful, heartfelt material with the honesty and richness that is signature to his vocals alone. With 24 top ten records, 16 #1 hits, and having been a 10 time male vocalist of the year nominee (5 CMA and 5 ACM), this truly electrifying performer of his era remains one of the great voices of our time.

George Wallace was one of the most controversial and conflicting figures of the second half of the 20th Century in America.  Four times governor of Alabama, four times a candidate for president, he was feared as a racist demagogue and admired as a politician who spoke his mind. A lightning rod for controversy, Wallace both reflected and provoked tensions in American society over more than four decades. This film traces the rise of the firebrand politician from his roots in rural Alabama to the assassination attempt that suddenly transformed him.

Winner of the Sundance 2000 Film Festival Special Jury Prize, “George Wallace: Settin’ the Woods on Fire” is produced by Paul Stekler and Dan McCabe and written by Steve Fayer (“Eyes on the Prize,” “Vote for Me,” “Rock & Roll,” “Nixon”). According to PBS, this film places the public and private George Wallace within the turbulent history of the 1960s and 1970s, tracing a powerful story relevant to today’s presidential politics.

The first film of the day is Beyond Galilee at 12 noon.  It is the story of the Civil Rights movement in Shreveport.  Following the film, director and producer Tim DeWayne will lead a talkback.

At 3pm, the documentary Central Park Five will be shown.  It explores the 1989 case of five black and Latino teenagers who were wrongfully convicted of raping a white woman in Central Park.  Social justice activist Iris Roley will lead a discussion following the film.

The second annual Arkansas Sounds Music Festival kicks off tonight at the River Market Pavilions.  There have been several activities throughout the month, but they have all been leading up to this weekend.

Arkansas Sounds Music Festival is a FREE event open to the public. Donations can be made to help support the festival.  Though it is free, and no tickets are issued, there are space limitations, so attendance is on a first come, first serve basis.

At 6pm, The Smittle Band will play its own brand of “jazzy Americana.”  The Arkansas Times has described them as: “Regulars in jazz bars around the state, The Smittle Band offers gorgeous, fluid lounge sounds with a trickling undercurrent of classy Americana. Fronted by Stephanie Smittle, the band balances her hushed, smoky vocals with sharp guitar work from co-writer Wythe Walker, tasteful, smart keys from Jim McGehee and brushing percussion courtesy of Ray Wittenberg.”

At 7:15, Tav Falco’s Panther Burns will take the stage.  They are best known for having been part of a set of bands emerging in the late 1970s and early 1980s who helped nationally popularize the blending of southern gothic with alternative and punk music.  From its beginnings in the Mississippi Delta, this band continues to play all around the world.  According to the band, the earliest description it gave itself on a concert poster read simply: “Rock’n’Roll”. Media confusion in categorizing led the band to eventually invent its own self-descriptive terms, such as “panther music” and “backwoods ballroom”, also at times calling its tumultuous performance style “art damage”.

The final act of the night is Dan Hicks & the Hot Licks at 8:30.  Beginning as a drummer in the seminal 60’s San Francisco rock band The Charlatans, and continuing with his unique and legendary Dan Hicks and the Hot Licks, Dan Hicks is widely acknowledged as one of the defining figures in American roots music. Having earned a reputation as a true original with his signature eclecticism and humor, Hicks continues to carve his way through a number of genres from proto-psychedelia to western swing and jazz, from tin pan alley to country blues — all the while cultivating his own unique sound.