Starting tonight at 7:30pm in the Lobby Bar, there will be an evening of music featuring the amazing talents of Erin Martinez on vocals, Mark Binns on vocals and piano, Pat Lindsey on drums, and Brian Wolverton on bass.

It’ll be a relaxed evening filled with jazz, soul, rock, musical theatre, and some other fun musical surprises!

There is no cover and no age limit at the Lobby Bar. It’s a friendly environment appropriate for all ages. The bar has a wide variety of wines, beers, ciders, hot cocoa, and soft drinks.

The Arkansas Repertory Theatre was one of 40 nonprofit, professional theater companies across 26 states selected to perform the works of William Shakespeare for students through the Shakespeare in American Communities grant. Participating theater companies will present productions of Shakespeare plays to students from at least 10 schools. The Rep has received a $25,000 grant to support a week of student matinee performances of Macbeth.

The awards mark the 13th consecutive year of Shakespeare in American Communities, a national program managed by Arts Midwest in partnership with the National Endowment for the Arts (NEA).

The Rep will produce Macbeth in September 2015 on its 377-seat main stage performance space on Main Street in downtown Little Rock as the first of its landmark 40th MainStage Season. The theatre will open the production with a week of free student matinees, attended by schools from across Arkansas.

“Arts Midwest is so proud to once again partner with the National Endowment for the Arts to support the activities of 40 outstanding theater companies that will bring Shakespeare’s plays alive for students across the country,” says Susan Chandler, vice president of Arts Midwest. “Shakespeare in American Communities’ goals of introducing students to the art form of theater and to Shakespeare’s timeless themes of love, ambition, jealousy, courage, and betrayal will be brilliantly executed by these theaters.”

View the complete list of the 40 theater companies that have been selected to participate in Shakespeare in American Communities for 2015-2016 at http://www.shakespeareinamericancommunities.org.

Ted Schaal graduated from Colorado State University, class of 1992, with a BFA concentrating on fiber arts and sculpture. He has been working as an artist and craftsman in Loveland since 1993. Ted chooses to produce his work in bronze and stainless steel so that his pieces will withstand the harshest of natural elements and should last for many generations.

Between 1993 and 2005 Ted’s work focused on functional designs in the form of boxes, treasuries and reliquaries. You will find mountain scenes, native flowers and Art Deco inspired designs embellishing the intricately carved exterior. Some special pieces have hand-woven tapestries adorning the interior walls. “I sculpt functional forms that are designed to enhance the everyday experiences of the user by creating a special and sometimes sacred interaction with the personalized contents of each piece.”

In 2004, he began using his corrugated texture to create strong geometric vessel forms. They are non-functional purely decorative objects for the home. The final compositions are reminiscent of artifacts from antiquity, designed to raise questions about their origins as well as their implied functions.

Recently, Ted has been exploring strong geometric forms in combination with a primitive corrugated texture, smooth and polished surfaces. The goal is an interesting juxtaposition of materials and surface textures. Moving away from the utilitarian boxes and non-functional vessels of his past, Ted’s new work is purely sculptural emphasizing strong horizontal balance, tension, and negative space. Larger forms frame and direct the viewer toward a focal point or focal space. “Functional objects have size limitations whereas sculpture does not.”

One of Alfred Hitchcock’s early films, while he was still in Great Britain, was 1935’s The 39 Steps. With themes that he would return to time and time again, it tells the story of a man in London who tries to help a counterespionage agent. But when the agent is killed and the man stands accused, he must go on the run to both save himself and also stop a spy ring which is trying to steal top secret information.

The film stars Robert Donat and Madeleine Carroll. Others in the cast are Lucie Mannheim, Godfrey Tearle, Peggy Ashcroft, John Laurie, Frank Cellier and Wylie Watson.  It also features a cameo by Hitchcock himself.

The film was written by Ian Hay and Charles Bennett, adapted from the novel by John Buchan.  The 39 Steps was adapted for the stage in the early 2000s and won two Tony Awards.

The mystery starts tonight at 7pm at the CALS Ron Robinson Theater.  Admission is $5 with concessions available for purchase. 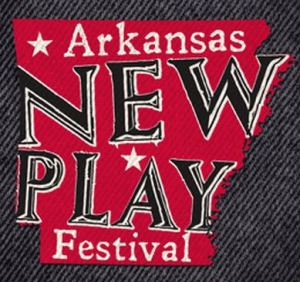 In partnership with TheatreSquared, located in Fayetteville, The Rep will host two staged reading performances in The Rep’s Lobby, located on the ground level.:

Saturday, June 27
Free of Charge
2 p.m. – Uncle by Lee Blessing
7 p.m. – Dust by Qui Nguyen
2 p.m. – Uncle by Lee Blessing
From Pulitzer Prize and Tony Award nominee Lee Blessing (A Walk in the Woods), Uncle is a comedy about an academic sabbatical gone terribly awry. Dr. Paul Waymiller is facing a “publish or perish” deadline on his book about Chekov’s masterpiece, Uncle Vanya. With his career in the balance, he refuses to be distracted by anything—be it his imminent divorce, Vanya himself, or the interdimensional wormhole that’s opened up in his backyard.ABOUT THE PLAYWRIGHT
Lee Blessing has written more than thirty plays, including A Walk in the Woods (nominated for Tony and Olivier Awards and a finalist for the Pulitzer Prize), Going to St. Ives, Independence, A Body of Water, Thief River, Two Rooms and Eleemosynary. Recent notable premieres include For the Loyal at Illusion Theatre in Minneapolis, Courting Harry at History Theatre in St. Paul and Great Falls at the Ensemble Theatre in Sydney, Australia. Blessing’s plays have earned two Steinberg/American Theater Critics Association awards as well as Obie, Outer Critics Circle, Drama Desk and L.A. Critics Association awards. His TNT film “Cooperstown” won the Humanitas Award. Blessing headed the Graduate Playwriting Program at Rutgers University for over a decade.

7 p.m. – Dust by Qui Nguyen
Dust is the story of Thuy, a girl who sets out to find her ex-G.I. father – who has kept her existence a secret from his wife for 16 years. Blending live hip-hop, raw emotion and wry wit, Dust recasts the American dream through the eyes of an Amer-Asian teenager in this redemptive, cross-cultural coming-of-age story.

ABOUT THE PLAYWRIGHT
Qui Nguyen is a playwright, screenwriter and co-founder of the OBIE Award-winning Vampire Cowboys of New York City. His work, known for its innovative use of pop-culture, stage violence, puppetry and multimedia, has been lauded as “Culturally Savvy Comedy” by The New York Times, “Infectious Fun” by Variety, and “Tour De Force Theatre” by Time Out New York. This past season, The Chicago Tribune praised him as a “refreshing, break-the-rules writer” as Time Out Chicago named his play She Kills Monsters one of the 10 Best Plays of 2013.Recent honors include being named a 2014 Sundance Institute/Time Warner Fellow; a 2014 McCarter/Sallie B. Goodman Fellow; a 2013 Sundance Theatre Lab Fellow; a recipient of a 2013 AATE Distinguished Play Award (She Kills Monsters); a 2012 TCG Young Leader of Color; and receiving 2012 & 2009 GLAAD Media Award nominations for his plays She Kills Monsters and Soul Samurai.
His company, Vampire Cowboys, often credited for being the pioneers of “geek theatre”, holds the unique distinction of being the first and currently only professional theatre organization to be officially sponsored by NY Comic Con. They’ve been praised by the Village Voice as “New York’s Best Army of Geeks” and currently in-residence at The New Ohio Theater and IRT.

The Goonies is one of those quintessential 1980s movies. So many in the cast went on to bigger projects after it.

In order to save their home from foreclosure, a group of misfits set out to find a buried treasure in a subterranean cavern. Here they cross the path of Mama Fratelli and her outlaw brood. The kids befriend Fratelli’s hideously deformed (but soft-hearted) son, who comes to their rescue.

The movie was directed by Richard Donner from a story by Steven Spielberg and screenplay by Christopher Columbus.  Sean Astin, Josh Brolin and Martha Plimpton (all offspring of Hollywood royalty) starred in the movie.  They were joined by Jeff Cohen, Corey Feldman, Kerri Green, Jonathan Ke Quan, John Matuszak and Robert Davi.  Joe Pantoliano and Anne Ramsey also turn in memorable performances.

The Goonies starts at 2pm at the Ron Robinson Theater.  Admission is $5. Concessions are available for sale. 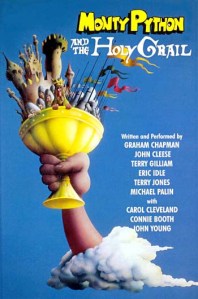 The Knights who say “Ni” will ride their fake horses onto the screen at the Ron Robinson Theater tonight.  At 7:30, the theatre will show Monty Python and the Holy Grail in honor of the film’s 40th anniversary.

Among the cast of characters are King Arthur, various Knights of the Roundtable, the Lady of the Lake, the Black Knight, killer rabbits and people who are not-yet-dead.  Directed by Terry Gilliam and Terry Jones, it was written by and stars John Cleese, Eric Idle, Graham Chapman, Michael Palin as well as Gilliam and Jones. Others in the cast include Carol Cleveland, Connie Booth and John Young.

Using the Arthurian legend as a framework, it manages to satirize and skewer many other social conventions with a very anachronistic tone.  The film was adapted for the musical theatre stage in 2005 as Spamalot which won the Tony Award for Best Musical.

The screening starts tonight at 10:00pm.  Cost for admission is $5.  Concessions are available for purchase.