It’s sleigh-loads of Christmas excitement at the City Mouse house with a whole lotta stirrin’ going on this Christmas Eve! It’s hardly the “silent-night-hot-cocoa-and-candy-canes-by-firelight” Christmas that Country Mouse expected with his City Mouse cousin. And to top it all off like a star on a tree, you’ll never believe who comes to visit!

This year’s holiday offering is an original script written by Keith Smith for the Arkansas Arts Center Children’s Theatre. The musical is very loosely based on Aesop’s fable “Town Mouse and Country Mouse.” Full of physical comedy, this production is a refreshing twist on a classic story.

The production opens tonight and runs through December 16.  Public performances are Fridays at 7 p.m., Saturdays at 1 and 3 p.m. and Sundays at 2 p.m.

The Godfather was the Best Picture.

All in the Family was the #1 tv show.

Pong was the most wanted Christmas gift.

To celebrate Bill Worthen’s 40th Anniversary as Director of Historic Arkansas Museum, the museum is hosting a reception on Friday, November 30 from noon until 1pm.  There wil be light refreshments (cake and punch), light remarks, and lights aplenty from the camera flashes.

Tonight’s performance of will consist of the Christmas portion of Handel’s oratorio Messiah plus some selected other choruses and solos. The ACS will be joined by the University of Arkansas at Pine Bluff Vesper Choir.  They will be accompanied by musicians from the Arkansas Symphony Orchestra.

The Arkansas Choral Society is under the direction of Dr. Kent Skinner.  He is currently the Director of Choral Activities for the University of Arkansas at Monticello. In this capacity, Dr. SKinner leads the choral program and serves as both stage and music director for the university’s opera and music theatre.

The Arkansas Choral Society is central Arkansas’s oldest continually operating musical organization. Best known for performing Handel’s Messiah in whole or in part every year since 1930, the Society’s repertoire includes both classical and contemporary works. Historically the group has traveled Arkansas performing concerts and has also performed at special events such as the Arkansas Sesquicentennial Celebration in 1986.

The Arkansas Choral Society partners with high school and college choirs throughout Arkansas for its performances, and offers scholarships for college students. The mission of the Arkansas Choral Society is to further and improve choral singing in Arkansas, by performing Handel’s Messiah on an annual basis; by partnering with Arkansas college and high school choruses; and by awarding scholarships to choral singers who are or will be college students, while inviting everyone to join us and to attend our concerts.

One of the new trends in food is micro gastronomy. The Museum of Discovery brings it to Little Rock tonight with food that just plain messes with your mind. The Museum will be preparing a few treats that look like one thing but taste like something completely different. Have you ever bitten into a lemon that tastes like lemonade? You can at this months Science After Dark!

Science after Dark occurs the last Wednesday of each month. Museum educators pick a science-related topic, and develop an event around it. The event is for ages 21 and older. General admission is $5 per person. Museum members get in free.

It is a great chance to explore the museum’s exhibits and enjoy downtown Little Rock. 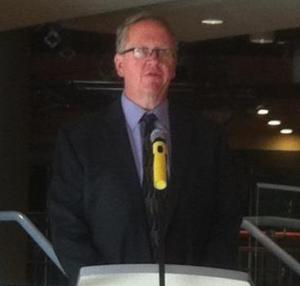 The Museum of Discovery today announced that Kelley Bass will become the next CEO of the Museum.  He will succeed Nan Selz who retires at the end of this year.

Bass, who is currently Assistant Dean for External Affairs at the UALR’s Donaghey College of Engineering and Information Technology. Prior to that he worked at Acxiom, Arkansas Business Publishing Group and newspapers in Arkansas and Missouri.

He has been a member of the Museum’s Board of Directors for the past three years as the facility has undergone an extension renvoation and reinvigoration under Selz’s leadership.  He has also been active in Riverfest and other downtown activities.

The Museum of Discovery was founded in 1927 and is Little Rock’s oldest museum.
The museum was originally accredited by the American Association of Museums in 1993 and was re-accredited in 2001. During the period between its founding and its accreditation, the museum actively collected approximately 14,000 cultural and historical artifacts and numerous species of live animals and insects.

In 1998, the museum moved to the River Market and in 2003 became a Smithsonian Affiliate.  In 2011, the museum closed for nine months in order to add a new entrance and undergo a total renovation. This project, funded by a grant from the Donald W. Reynolds Foundation, also provided funding for new, interactive science exhibits, completing the museum’s transformation from a collecting museum to a science center.

The Mission of the Museum of Discovery: To ignite a passion for science, technology and math in a dynamic, interactive environment.

First organized in 1968 by then-Arkansas Arts Center Director and Chief Curator Townsend Wolfe, the purpose of the exhibition is to encourage local collecting, acquaint Arkansas Arts Center visitors with works from New York galleries and promote the drawing media.

Through the years the exhibition has evolved to an annual tradition that brings the New York Gallery scene to Little Rock. Executive Director Todd Herman and curators select the best in drawings and contemporary craft from over 20 New York galleries.

The exhibition includes works in a variety of media that range from 18th century masterworks to contemporary pieces by emerging artists. The unique and varied selection of works allows seasoned buyers to add to their collections, while introducing potential new collectors to the field.

There will be a members reception on Thursday, November 29 from 6pm to 8pm.  Memberships are available at the door.

The Weekend Theater’s next production opens this Friday.  It is the stage adaptation of S. E. Hinton’s novel The Outsiders.

For those unfamiliar with the novel or the 1980s movie, The Outsiders tells the story of two groups of teenagers whose bitter rivalry stems from socioeconomic differences. However as the plot unfolds there are some characters who realize these differences in social class do not necessarily make natural enemies of the two groups.

The play runs on Fridays and Saturdays at 7:30pm through December 15.