On March 31, 1940, the City of Little Rock and the Auditorium Commission threw open the doors of Joseph Taylor Robinson Memorial Auditorium to the public for an open house.

The building had officially opened in February 1940, and events had been taking place in the lower level since October 1939. But this was the first time that the public could tour the entire facility from top to bottom.

The event took place on a Sunday from 1pm to 9pm.  Curiously, it took place two days before a special election to approve the bonds to finish the auditorium. Though no one at the time was cynical enough to comment on the connection.

Members of various Little Rock Boy Scout troops led 4,000 visitors on tours of the auditorium.  Visitors were shown all over the building; one scout calculated that the walking tour equated to two miles.  Though most people were from Little Rock, the guest registry indicated visitors from California and Pennsylvania.  Among the last guests to sign the register were Mayor J. V. Satterfield and his family.

The idea for the open house had first been floated in December by Alderman E. W. Gibb after taking a tour of the construction site. He had enthusiastically professed that everyone should be able to tour and see what a magnificent structure it was going to be.  Mayor Satterfield had to tamper the alderman’s enthusiasm. Hagreed with Mr. Gibb that it was a fine building but stated that a public open house could not be scheduled for a few weeks because there was still much work to be done.  Mayor Satterfield noted that the seats in the music hall were going to have to be removed and then reinstalled because they needed to be anchored bette

A free, guided­ painting experience with local artists will include a first look at the course offerings, which will begin in May. Library programs are taking on an increasingly important role in the library’s contribution to the community. Over the past decade, programming has increased 215%. An expansion of that programming concentration is a new department dedicated to Adult Programming.

The keystone of that department is CALS Community Learning Courses, which cover a variety of subjects and skills that enable and encourage lifelong learning pursuits by offering short-­term, non­-credit learning and enrichment opportunities. Courses range from single sessions to intensive workshops with multiple sessions. A wide range of classes are offered in order to fit varying needs and schedules with the best rates possible for course fees and materials to ensure access and affordability. Registration is available at www.cals.org/community­learning­courses beginning Wednesday, April 1.

The public library has been serving the central Arkansas area for over 100 years. Today’s CALS patrons have access to over a million physical items, including books, magazines, CDs, and DVDs. CALS has adapted to serve users significantly in the last ten years while still providing traditional library services. Most CALS programs are free to the public and are designed to appeal to a variety of ages and interests. Last year, CALS presented over 2,100 programs for adults.

﻿This evening at 6pm, Peter Gluck, founder and principal of Gluck+ of NYC will speak.  Entitled “What’s Wrong with Us,” the lecture is presented by the Architecture and Design Network.

Gluck +, the innovative architectural firm founded by Peter Gluck, is known for its multi-faceted approach to creating award winning buildings. Responsive to a range and variety of factors – site, cost, time, construction, evolving client needs and attitudes among them – the firm is capable of dealing with a project from conception to completion.

The process, known as Architect Led Design Build (ALDB), requires the architect’s assuming responsibility for all phases of a building’s construction as well as its design. One firm, wielding a hammer as well as a pencil, does it all. in architectural circles, the approach is frequently the exception rather than the rule.

While a student at Yale, where he  earned his bachelor’s and master’s degrees, Gluck encountered the design build culture that subsequently served as the inspiration for ALDB. Architectural luminary Louis Kahn who taught at Yale  during the time Gluck was a student at the School, had an early and significant influence on his approach to architecture, his focus on the important link between design and construction.

Gluck, known for his iconic tree topping Tower House, is  also regarded for his work with moderate income urban housing. In one example, components were prefabricated in Pennsylvania and assembled on site in New York City.

Gluck, who is widely published in architectural journals worldwide, has taught at the Columbia and Yale schools of architecture. Exhibitions of his award-winning work have been held in the United States and Japan. He has curated exhibits for the Museum of Modern Art.

The program will take place in the lecture hall at the Arkansas Arts Center at 6pm.  A reception will start at 5:30 prior to the lecture.

All Architecture and Design Network lectures are free and open to the public. For additional information contact ardenetwork@icloud.com. Supporters of ADN include the Central Section of the Arkansas Chapter of the American Institute of Architects, UA’s Fay Jones School of Architecture, the Arkansas Arts Center and friends in the community.

Tonight, Tales from the South looks at what happens when we experience “A Turn of Events.” This evening’s program will take place at The Oyster Bar.

The storytellers for this edition are Suzie Branton, Emily Noah and Alan Reese.  Music is by blues guitarist Mark Simpson.

“Tales From the South” is a radio show created and produced by Paula Martin Morell, who is also the show’s host. The show is taped live on Tuesday. The night is a cross between a house concert and a reading/show, with incredible food and great company.

Tickets must be purchased before the show, as shows are usually standing-room only. “Tales from the South” is a showcase of writers reading their own true stories. While the show itself is unrehearsed, the literary memoirs have been worked on for weeks leading up to the readings. Stories range from funny to touching, from everyday occurrences to life-altering tragedies.

Dinner is served from 5pm to 6:30pm, the show starts at 7pm.  Admission is $15 in advance.  Dinner can be purchased separately. You MUST purchase your ticket before the show. Any tickets available at the door will be $20.

Previous episodes of “Tales from the South” air on KUAR Public Radio on Thursdays at 7pm.  This program will air on April 9. 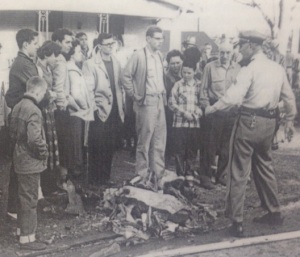 The peaceful morning of March 31, 1960, was interrupted by a horrendous noise over Hillcrest around 6:00am.  A six-engine B47 from the Little Rock Air Force Base exploded mid-air.

Flaming debris fell from Allsopp Park all the way to the State Capitol grounds and stretched from Cantrell to 12th Street.  Other debris was found as far away as the Country Club of Little Rock.  The next day the Arkansas Gazette ran a map which showed the extent of the damage.

Three airmen died in the explosion and two civilians were killed when debris fell on their homes.  The only survivor from the crew, 1st Lieutenant Thomas Smoak, was found dangling from a tree in his parachute at Kavanaugh and Martin.  He was treated by a nurse, Jimmye Lee Holeman, in whose yard he had landed.

Many vehicles and homes were damaged, some were destroyed by debris.  The damage estimate was put around $4 million.

Police and fire crews were quickly on the scene to secure impacted areas, fight fires and rescue injured persons.

The Strategic Air Command’s edited account of the incident noted:

A B-47 was climbing after takeoff in day VFR weather.  At about 15,000 feet, the copilot suddenly realized that the aircraft was in a very steep left bank, that the nose was well below the horizon, and that the airspeed was excessive.  He pulled the throttles to idle, punched the interphone button and shouted at the aircraft commander.

Almost immediately, the nose came up, the wings leveled, and the aircraft disintegrated.  In the cockpit section, which had separated intact from the rest of the aircraft, the copilot tried to eject, but the clamshell initiator pin had not been removed.  The copilot then unfastened his seat belt.  The canopy blew off at about 10,000 feet.  The unconscious copilot was thrown out at 4,000 feet and his parachute opened automatically.

The aircraft commander ejected at 2,000 feet, but his parachute had been fused by fire and he died upon impact.  The fourth man was found near the wreckage and did not survive.  The navigator was killed in his position.  The falling wreckage killed two civilians and caused serious damage to property.”

To Little Rock citizens under a certain age, the name Knoop means Knoop Park — a picturesque park tucked away in a pocket of Hillcrest.  There are, however, still many who remember Werner C. Knoop as a business and political leader who helped shape Little Rock as a modern city.

In 1946, Knoop joined with Olen A. Cates and P. W. Baldwin to form Baldwin Construction Company in Little Rock.  Knoop had previously founded Capital Steel Company and established his business reputation there.  From 1945 through 1951, he served on the Little Rock School Board.

Following a series of political scandals, efforts were undertaken for Little Rock to shift from Mayor-Council to City Manager form of government.  Even before the desegregation of Little Rock Central put the city in the eyes of the world, an election for new leaders had been set for November 1957.  Knoop was on a “Good Government” slate and was one of the members elected.

At the first meeting of the new City Board, Werner C. Knoop was chosen by his fellow directors to serve as Little Rock Mayor.  Knoop served as Mayor until December 1962.  For the first several months in office, Little Rock had no City Manager so Knoop oversaw the transition of City staff as the forms of government changed.

Though City Hall generally stayed out of school district matters, that did not mean that the public viewed the two entities separately.  In September 1959, the Baldwin Construction offices were bombed as part of a series of terrorist activities protesting the desegregated reopening of all Little Rock high schools.

After two terms on the City Board, Knoop decided against seeking a third term.  He concluded his elected public service on December 31, 1962.  Following his time on the City Board, Knoop did not retire from Civic Affairs.  In 1970, he served as Chairman of the Little Rock Chamber of Commerce.   The previous year he served as President of the Arkansas Chapter of Associated General Contractors.

Mayor Knoop died in July 1983.  He is buried at Roselawn Memorial Park next to his wife Faith Yingling Knoop, a renowned author.

In the 1930s, Knoop moved into an Art Moderne house on Ozark Point in Hillcrest.  It was adjacent to Little Rock Waterworks property which was developed around the same time.  Eventually much of the land was deeded to the City for creation of a park.  In 1989, it was named in tribute to long-time neighbor Knoop in honor of his lifetime of service to Little Rock.

Local and national leaders will gather at the Clinton Presidential Center to discuss the No Ceilings Full Participation Report, the culmination of a year-long, global data aggregation effort that identifies the significant gains women and girls have made – and the gaps that still remain – since the U.N. Fourth World Conference on Women in Beijing in 1995.

On March 9, 2015, the No Ceilings Full Participation Report was released at an event in New York City with Secretary Hillary Rodham Clinton, Chelsea Clinton, and Melinda Gates. On March 30, the Clinton Foundation and the Clinton School of Public Service will host a panel discussion and provide a forum for panelists to localize the data and information gathered in the report.

The event is FREE, but reservations are required. To reserve your seat, email LRevent@clintonfoundation.org.

It will take place in the Great Hall of the Clinton Presidential Center.