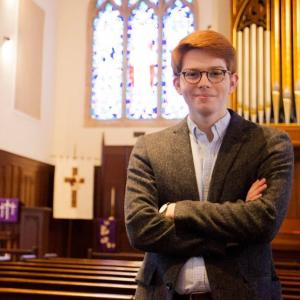 At Eastertide, an organ concert by Thomas Alexander, will be presented tonight (May 17) at Christ Church at 7pm.

The concert will showcase music for the Easter season: organ works by Howells, Scheidemann, Buxtehude, Bach, and Widor, and works for organ and trumpet by recent visiting composer Richard Webster. Jamie Bryant will play the trumpet.

Thomas Alexander is the Associate Organist and Choirmaster of Christ Episcopal Church, helping direct a vibrant music program in downtown Little Rock. A graduate of Hendrix College, he studied organ performance with Timothy Allen and conducting with Andrew Morgan and Gretchen Renshaw James.

Admission is free, but all donations will help support the upcoming 2019-2020 Arts@ChristChurch season. A festive reception follows the concert.

Nichols & Simpson, Inc., Organbuilders has a stellar world-wide reputation as a manufacturer and tuner of organs.  And they are located in Little Rock.

Many of the churches in Central Arkansas have Nichols & Simpson organs.  One of those is Christ Church at Capitol and Scott Streets. To commemorate the 25th anniversary of the dedication of that organ, the church has scheduled a Evensong service to be followed by an organ recital featuring Michael Kleinschmidt.

The choir of Christ Church will sing Evensong. The music will include the “Magnificat” and “Nunc Dimittis,” “Collegium Regale” by Herbert Howells, and “Psalm 150” by César Franck.

Michael Kleinschmidt, canon musician at Saint Mark’s Episcopal Cathedral in Seattle, will be the organist. An organ recital by Mr. Kleinschmidt will follow the service.  From 2010 until March of this year, he served as canon for cathedral music at Trinity Cathedral in Portland, Oregon.  He previously served at Trinity Church, Copley Square in Boston, All Saint’s Parish in Boston and St. Thomas Fifth Avenue in New York. He holds degrees from Eastman School of Music and Oberlin College Conservatory of Music.

Kleinschmidt is an accomplished organist, having played in recital across the world, including an All-Bach concert at Saint Mark’s on the Flentrop Organ in 2012. He also has a keen appreciation for the ministry of music in children, and serves on faculty of Royal School of Church Music summer courses.

A festive reception will follow the Evensong and recital.