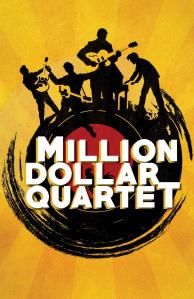 August 16 marks the 42nd anniversary of the death of Elvis Presley.  (Or did he die?  Is he actually living in seclusion with JFK and others?)

In September, Elvis will come back to life as the Arkansas Repertory Theatre presents MILLION DOLLAR QUARTET.

Four musical legends. A one-in-a-million recording session.
On December 4, 1956, in the studios of Sun Records in Memphis, Elvis Presley, Johnny Cash, Carl Perkins, and Jerry Lee Lewis gathered to meet with legendary producer Sam Philips. What happened next was pure rock and roll magic.
A casual introduction of Lewis to Perkins unexpectedly evolved into an epic jam session of country, gospel and rock classics, captured on tape but not released until 1981.
With a collection of hit songs that includes “Blue Suede Shoes,” “Folsom Prison Blues,” “Great Balls of Fire,” and “Hound Dog,” this Tony Award-winning musical is guaranteed to blow the roof off!
The show, which won a Tony Award and was nominated for Best Musical, was written by Colin Escott and Floyd Mutrux.  The Rep’s production is directed by Hunter Foster who played Sam Phillips in the original Broadway cast.
The production opens on September 6 and plays through October 6.