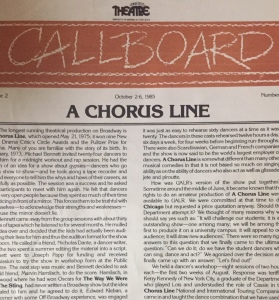 In April 1975 A Chorus Line premiered Off Broadway before transferring to Broadway in July 1975. In 1976, it became only the fifth musical to win the Pulitzer Prize for Drama.

Whereas the composer of the first musical to win the Pulitzer was not honored (apparently because he only wrote music, not actual words), with A Chorus Line’s citation, the Pulitzers recognized not only librettists James Kirkwood and Nicholas Dante, lyricist Edward Kleban, and composer Marvin Hamlisch, but also Michael Bennett who conceived the project and steered its development.

In October 1985, the University of Arkansas at Little Rock became one of the first non-professional organizations to ever perform  A Chorus Line.  The theatre department was planning on producing Chicago, but dropped that show when rights for A Chorus Line became available.  (Chicago was on Broadway at the same time as A Chorus Line and was often overshadowed by it.)

In preparation for the show, UALR (as it was then known) conducted a dance workshop in August 1985 conducted by alum Kerry Kennedy, who had appeared in the national and international tours of the show.  After the workshop, auditions were held and the rehearsal process started.

Many familiar names in the Little Rock theatre scene from the 1970s to the present were involved in A Chorus Line.  The production was directed by Carolyn Curry, choreographed by Dot Callanen, and music directed by Lori Loree.  Jay Jagim provided the scenic and lighting design, while Joy Breckenridge was costume designer.

2018 marks the 100th anniversary of the first Pulitzer Prize for Drama being given. To pay tribute to 100 years of the Pulitzer for Drama, each day this month a different Little Rock production of a Pulitzer Prize winning play will be highlighted.  Many of these titles have been produced numerous times.  This look will veer from high school to national tours in an attempt to give a glimpse into Little Rock’s breadth and depth of theatrical history.