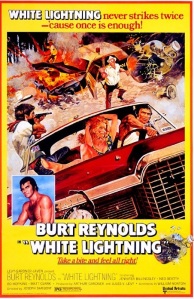 For this month’s Second Friday Cinema, the Old State House Museum will present a screening of White Lightning. The screening begins at 5:30 pm.

Released in 1973, “White Lightning” stars Burt Reynolds as Bobby “Gator” McKlusky, a moonshiner serving time in an Arkansas prison. When his brother is murdered, Gator agrees to go undercover with the feds in order to expose a corrupt lawman.

Ben Fry, General Manager of KLRE/KUAR and coordinator of the film minor at UALR, will introduce the film and lead a discussion after the screening.