Today is International Women’s Day. The Arkansas Arts Center currently features several exhibitions celebrating women artists.  One of them is Dorthea Lange’s America.  It is on display through May 8. 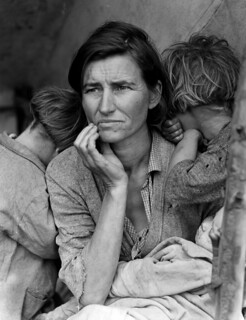 Migrant Mother strikes the heart. Dorothea Lange’s iconic image of the Great Depression forces us to confront the humanity and strength of one woman struggling to get her family through the privations they face when there is no money. Dorothea Lange’s America brings together many of the photographer’s images made as she traveled across America during the 1930s documenting the suffering of unemployed or terribly underpaid agricultural workers and their families. Lange took these photographs as part of the photography program connected to the Farm Security Administration, a federal agency formed under the New Deal to assist poor farmers with loans and other programs.

Lange and her fellow FSA photographers recorded the lives of people coping with the dust bowl, bank and business failures, and the loss of their jobs and homes. We see the hopelessness of hungry men in breadlines and the shattered, abandoned cabin of a tenant farmer in the Mississippi Delta. But Americans did not give up. We also see the determination of men doing the grueling work of cutting lettuce for a pittance a day. And there is the radiant smile of an Arkansas mother who went to California to make a new start with her husband and eleven children. Such powerful images helped government agencies and representatives to understand the urgency of helping suffering Americans who had no other place to turn. 80 years later, these black and white documents of American endurance have not lost their impact.

Dorothea Lange’s America includes photographs made by Lange and her FSA colleagues, including Walker Evans, Ben Shahn, and Marion Post Wolcott. Depression-era photographs from photographers outside the FSA give a wider understand of the time. Here are striking visions by Mike Disfarmer, who worked as a portrait photographer in Heber Springs, Arkansas; and documentary images made from Oklahoma to Alabama by photographic artists including Lewis Hine, Doris Ulmann, and Willard Van Dyke. The exhibition continues with photographs Dorothea Lange made in the same spirit after the FSA was disbanded in 1943.