Today is Twelfth Night. Since it is also the title of one of Shakespeare’s most-produced plays, it seems a good chance to preview the 2020 Arkansas Shakespeare Theatre season.

While they HAVE produced Twelfth Night, it is not part of the 2020 season.

The lineup DOES include: As You Like It, Into the Woods (based on the writings of my relatives the Brothers Grimm), as well as The Complete Works of William Shakespeare (abridged).

Performance dates will be announced in coming weeks.

Mary Ruth Marotte is the Executive Director and Rebekah Scallet is the Producing Artistic Director. 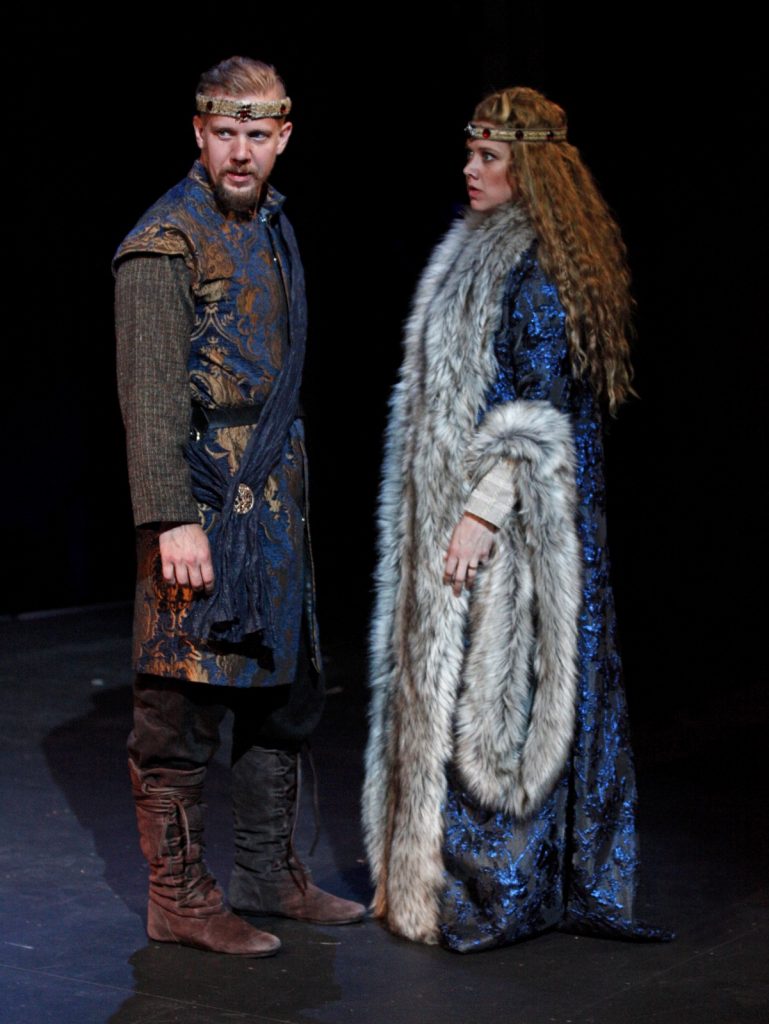 Earlier this evening (2/19) the Arkansas Repertory Theatre announced its 2018-19 Season. Beginning in September, the new season exemplifies The Rep’s mission of producing diversified work of the highest artistic standards. “Variety is, once again, the watchword at The Rep,” said Producing Artistic Director John Miller-Stephany.

The Rep’s 2018-19 Season opens with one of the most beloved American plays of the 20th Century. Tennessee Williams’ The Glass Menagerie is a delicate memory play about family life set in a Depression-era St. Louis tenement. While rebellious Tom Wingfield dreams of running away from his tedious existence, his stubborn mother Amanda elegizes romantically about her Southern debutante past. And in the midst of their disputes, Tom’s timid sister Laura escapes from the cruelty of the world by retracting into an imaginary realm populated by her collection of fragile glass animals.  Directed by John Miller-Stephany, it runs September 5 to 23 with opening night on September 7.

Next is the stage adaptation of the classic film Guess Who’s Coming to Dinner?  When Joanna decides to surprise her parents with an impromptu introduction to her new fiancé John, she overlooks one small detail – he’s Black. Despite their self-professed liberal political leanings, Mr. and Mrs. Drayton find themselves scrambling when their beliefs are put to the test. But Joanna has yet another bombshell in store – she has invited John’s parents over for the evening as well. The script is by Todd Kreidler, adapted from the screenplay by William Rose. Directed by Arkansas Rep founder Cliff Fannin Baker, it runs from October 24 to November 11 with an opening night of October 26.

Louisa May Alcott’s Little Women has been a beloved novel since it was first published.  Every generation it seems to inspire a classic movie, and in the mid 2000s, it became a Tony-nominated musical on Broadway.  While the Civil War rages far away from their humble New England home, tomboy Jo refuses to conform to the demands made upon her by “polite society.” As her mother and sisters patiently await the return of their father from the battlefield, Jo’s contagious optimism endures in the face of romantic confusion and personal tragedy.  With the opening scene set at Christmas, it is fitting that Little Women is the Rep’s holiday musical.  The book is by Allan Knee with a score by Mindi Dickstein and Jason Howland.  Directed by John Miller-Stephany, it runs from December 5 to 30, with opening night of December 7.

Containing some of Shakespeare’s most famous speeches, As You Like It is a comedy about love, exile, wit, and disguises all set in the Forest of Arden.  Orlando loves Rosalind. Rosalind loves Orlando. But Rosalind is disguised as Ganymede – who’s a boy! And Phebe loves Ganymede – who’s really Rosalind. Yet Silvius loves Phebe. And Rosalind’s best friend Celia loves Orlando’s brother Oliver. But Oliver hates Orlando. And Touchstone lusts after Audrey. Unfortunately, no one much cares for Jacques. Celebrate romance as Shakespeare’s timeless comedy takes center stage at The Rep!  Directed by Giovanna Sardelli, it runs from February 6 to 24, 2019, with an opening night of February 8, 2019.

On December 4, 1956, in the studios of Sun Records in Memphis, Elvis Presley, Johnny Cash, Carl Perkins, and Jerry Lee Lewis gathered to meet with legendary producer Sam Phillips. What happened next was pure rock and roll magic. Million Dollar Quartet shows what happens when a casual introduction of Lewis to Perkins unexpectedly evolved into an epic jam session of country, gospel and rock classics, captured on tape but not released until 1981. The show has a collection of hit songs that includes “Blue Suede Shoes,” “Folsom Prison Blues,” “Great Balls of Fire,” and “Hound Dog.”  The show is written by Colin Escott and Floyd Mutrux from an original idea by Mutrux.  Directed by original cast member Hunter Foster (a Tony-nominated actor), the musical runs from March 27 to April 21, 2019 with opening night on March 29, 2019.

The season ends with the comedy Women in Jeopardy! Wendy MacLeod’s play tells the story of Liz who starts seeing a new man and throws caution (and her book club selections) to the wind. However, her friends can’t get over the fact that Liz’s latest beau is just plain creepy. What else are they supposed to think about a dentist with a Hannibal Lecter obsession and a bizarre collection of “antique” orthodontic contraptions in his basement? And then there’s the recent disappearance of his dental hygienist…  Directed by John Miller-Stephany, it runs from June 5 to 23, 2019. Opening night will be June 7, 2019.

Founded in 1976, the Arkansas Repertory Theatre is the state’s largest nonprofit professional theatre company. A member of the League of Resident Theatres, The Rep has produced more than 350 productions including 40 world premieres in its 377-seat theatre located in its historic building in downtown Little Rock.

Today is the traditionally observed birthday of William Shakespeare. It is known he was born in 1564, which makes this the 451st birthday.

The Arkansas Shakespeare Theatre earlier announced the lineup for the 2014 season.   The dates have now been announced.

The Merry Wives of Windsor – Love and deception are the name of the game in the small town of Windsor when Shakespeare’s famous larger-than-life anti-hero Falstaff comes for a visit. Falstaff sets out to woo the Housewives of Windsor for some quick cash, but finds himself outfoxed by the wise Windsor Wives, becoming the buffoon instead of the leading man in his own ambitious tale of romance.  The entire family will laugh their way through this energetic and charming farce.

The Merchant of Venice – Comedy and tragedy collide in this story of lovers united and families torn apart.  At the center is Shylock, the Jewish moneylender. When the Venetian merchant Antonio is forced to seek a loan from Shylock, a man he despises for his religion and profession, he is asked to enter into an impossible contract: he must give a pound of flesh if unable to pay back the borrowed sum. What follows is a complex and challenging exploration of love, mercy, integrity, and justice that reminds us that, “all that glisters is not gold.”

As You Like It – For All Ages! This one-hour Family Shakespeare adaptation takes you on a comedic romp through the Forest of Arden, an enchanting world in which nothing is quite what it seems.  Rosalind is our bold and witty heroine who discovers her true nature and the nature of love when forced into disguise as a boy. This play reveals the potential of poetry to make things happen—to transform and reform, to turn longing into love, and to reveal wisdom through silliness.

Also available to tour to communities across the state through July 5. All you need is a space—we’ll provide the rest.  For more information about how to bring As You Like It to your town, e-mail Mary Ruth Marotte at mrmarotte@arkshakes.com.

Fiddler on the Roof – This classic beloved musical tells the story of Tevye the dairyman who takes ultimate joy in his family and traditions. He works to raise his five daughters and see them married well, but must struggle against modern ideas and the rising tide of anti-Semitism in 1900s Russia that threaten to destroy his family and their way of life.

The Arkansas Repertory Theatre will kick off their 2015-2016 season with the Scottish Play running from September 11 – 27.

After receiving an ominous prophecy on a blood-soaked battlefield, Macbeth and his ambitious wife claw their way to the Scottish throne, and damned be all who stand in their way! Each step closer to fulfilling his royal Fate leads Macbeth deeper and deeper into a fiendish quagmire of carnage and corruption, from which none can survive; not even him.

“The original House of Cards. It’s fitting to start off a milestone season with the English language’s greatest author,” said Bob Hupp, Producing Artistic Director at Arkansas Repertory Theatre. “Shakespeare keeps us honest, and tests our mettle when we seek to tell great stories that demand to live on a stage. I’ve been reading and seeing productions of The Scottish Play for more than 30 years, now I’m ready to direct it for you this fall.”