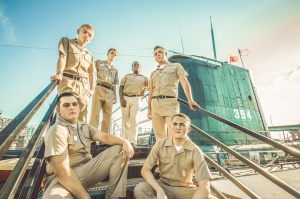 The Studio Theatre presents the regional premiere of Dogfight, a story of compassion, heartbreak and redemption adapted from the 1991 movie. With music by Benj Pasek and Justin Paul (James and The Giant Peach, A Christmas Story) and book by Peter Duchan, Dogfight offers audiences the winning combination of a great musical score, an unexpected love affair and a genuine soul.

It’s November 21, 1963. On the eve of their deployment to the small but growing ‘little conflict’ in Southeast Asia (and unbeknownst to them, also the eve of President John F. Kennedy’s assassination), three young, fresh and cocky Marines are looking forward to one final night of partying. They set out to find the ugliest girl to bring to the “dogfight”, a cruel game where the men put up money for a party and a cash prize for whoever brings the ugliest girl. But when Corporal Eddie Birdlace meets Rose, an awkward and idealistic waitress he enlists to win the cruel bet with his fellow recruits, she rewrites the rules of the game and teaches him the power of love and compassion. Dogfight is a powerful and haunting musical about the end of the age of innocence in the 60’s.

Winner of the Lucille Lortel Award for Best Musical in 2013, Dogfight runs August 20- August 23 at The Studio Theatre located at 320 West 7th Street. Performances are Thursday, Friday, and Saturday, August 20, 21 and 22, 2015 at 7 PM and Sunday August 23, 2015 at 2 PM. Ticket price is $20 for Adults and $15 for Students, Senior Citizens and military (with valid id). Seating is general admission. Tickets can be purchased at www.eventbrite.com.

Due to mature themes, adult content and strong language, this production is not recommended for young children.

The production is directed by Mark A. Burbank.  Bob Bidewell is the music director.  Others on the crative team include Hannah M. Sawyer, Anthony McBride, Stacey Johnson, Sarah Scott Blakey and Tye Davis.  Justin A. Pike is the Artistic Director of The Studio Theatre.

Edith Hamilton’s Mythology was never like this.  The god, goddesses, muses and mythical creatures that romp and skate through Xanadu are having more fun than I remember from my studies in high school and college.

Based on the 1980 Olivia Newton-John/Gene Kelly flop of the same name (and lifting some pages from the equally floptastic Clash of the Titans) the stage musical aspires only to be a tongue-in-cheek, eye-winking, breezy, entertainment.  What the book, by Douglas Carter Beane, lacks in plot believability, it makes up with jokes and heart.

As main muse Clio and her Australian alter-ego Kira, Courtney Speyer brings a light-hearted touch to the role. She spends most of the show on roller skates, which is no easy task.  Speyer charms not only her leading man but also the audience as she sings, dances and jokes her way through the story.

Kevin Crumpler plays the object of her affection. With bright eyes, a broad gleaming smile, and a cheery personality, he is an obvious match for Speyer. His pleasant and powerful singing voice is nicely used throughout the show as well.  Crumpler has a deft comic timing which was put to good use, especially in moments when Sonny’s dimwittedness and naiveté get the best of him.

Greg Blacklaw is equally at home as a harried businessman as he is as Zeus.  Though he spends more time as the former, the latter is actually fleshed out more by the book. Regardless, Blacklaw brings gravitas when necessary as well as a sense of nostalgia and longing to the roles.

Though everyone in the cast seems to be having fun, undoubtedly the two having the most fun are Amy Young and Gabi Baltzley as two scheming evil muses (representing tragedy and epic poetry).  They mug, leer, giggle, cackle, and chew scenery (Baltzley quite literally) as they sing and zing while throwing stumbling blocks in the way of the hero and heroine.

The cast is rounded out by Tye Davis, Adriana Napolitano, Bridget Davis and Brian Earles. These proteans zip between the 1940s, 1980 and Ancient Greece all the while singing and dancing. Earles had a cameo as Hermes that was both deadpan and saucy — not an easy feat.

Multi-hyphenate Justin A. Pike directed the show. (The artistic director of the Studio Theatre, he also designed the scenery and co-designed the lighting.) He kept the story going briskly without making it seem rushed. With the slight book, it cannot afford to drag lest the audience think too hard. Trusting his actors and audience, he doesn’t skip over the jokes in the book, but he also doesn’t hammer them home. This understanding of audience and of actors’ abilities are marks of his adroitness as a director.

Hannah M. Sawyer’s costumes pay homage to both Ancient Greece and 1980. Let’s face it, with flowing light fabric, there really wasn’t too much different between the two.  Sawyer creates a unique look for each muse in both color and style.  She also created attire which allowed a variety of movement. Her 1940s clothes were classic and avoided the temptation to be caricatures. On the other hand, her mythical creatures were over-the-top and the hilarious.

Bob Bidewell’s music direction maximized the vocal abilities of the singers.  The singers’ voices blended well together in the variety of vocal styles in this score.  This music from 1980 is not the strongest, which offers its own set of challenges. Bidewell and the cast succeeded in making it work on stage.  He also led the four-piece orchestra through Jeff Lynne and John Farrar’s score.

Xanadu plays today at 2pm. It resumes performances July 16 to 18 at 7pm and the 19th at 2pm.  It is like a summer cocktail – frothy, light, a touch sweet and refreshing.

What better way to end your 59th season than with a show with a 5 and a 9?  The Community Theatre of Little Rock presents the musical 9 to 5 through June 21st at The Studio Theatre (320 West 7th Street).

Performances are at 7:30pm on Thursday, Friday and Saturday evenings and at 2pm on Sunday afternoons.

9 to 5 is written by Patricia Resnick, who co-wrote the movie screenplay, with songs by Dolly Parton.  Parton received a Tony nomination for her score.

Set in the late 1970s this hilarious story of friendship and revenge in the Rolodex era is outrageous, thought-provoking, and even a little romantic.  Pushed to the boiling point, three female co-workers concoct a plan to get even with their boss. In a hilarious turn of events, Violet, Judy and Doralee live out their wildest fantasy – giving their boss the boot! While Hart remains “otherwise engaged,” the women give their workplace a dream makeover, taking control of the company that had always kept them down.

The production is directed by Justin Pike with Jo Murry serving as music director.