As part of Banned Books Week, the Central Arkansas Library System is showing the 1999 film Fight Club, which is based on the 1996 novel of the same name by Chuck Palahniuk.

Starring Helena Bonham-Carter, Edward Norton, and Brad Pitt, Fight Club tells the story of an insomniac office worker and a devil-may-care soapmaker who form an underground fight club that evolves into something much, much more. The movie was directed by David Fincher.

The screening starts at 7pm tonight (September 26) at the CALS Ron Robinson Theater.

Prior to the screening, at 6:00pm, UFC and Bellator professional fighter and jujitsu competitor Roli DelGado will appear in person. Meet him and get a few fighting tips! Del Gado was featured on The Ultimate Fighter Season 8.

Also, the winner of the 2019 CALS Banned Books Week Writing Contest will be announced and awarded a $300 prize.

The eleventh season of Movies in the Park ends in a big way – a big green, hulking way.  The 2008 adventure film The Incredible Hulk starts tonight at sundown at the First Security Amphitheatre in Riverfront Park. Tonight’s sponsor is Polk Stanley Wilcox architects.

Little Rock’s own Movies in the Park, brought to you by the Little Rock Convention and Visitors Bureau and the City of Little Rock, finishes its 11th annual season tonight, Wednesday, July 29 at the First Security Amphitheatre.  Movies are shown every Wednesday during the season and begin at sundown.

Based on the comic book and mindful of the 1970s TV series, The Incredible Hulk was directed by Louis Laterrier.  Bruce Banner, a scientist on the run from the U.S. Government must find a cure for the monster he emerges whenever he loses his temper. However, Banner then must fight a soldier whom unleashes himself as a threat stronger than he. 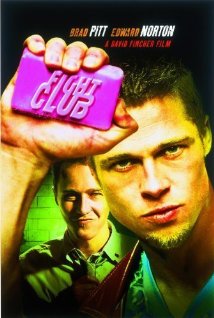 The first rule about watching Fight Club is that you DO talk about going to see the movie.  Tonight, the CALS Ron Robinson Theater will be screening this modern iconic film starring Oscar winner Brad Pitt and Oscar nominee Edward Norton.  (Hard to believe the film is 16  years old in 2015.)

Directed by David Fincher, it also starred Meat Loaf and Helena Bonham Carter.  Fight Club concerns an insomniac office worker looking for a way to change his life.  He crosses paths with a devil-may-care soap maker and they form an underground fight club that evolves into something much, much more…

The movie starts at 7pm tonight. Admission is $5. Concessions are available for purchase, as well.