An American grandson of the infamous scientist, struggling to prove that his grandfather was not as insane as people believe, is invited to Transylvania, where he discovers the process that reanimates a dead body.
The movie was nominated for two Oscars: Best Sound and Best Adapted Screenplay.
The screening starts at 7pm. 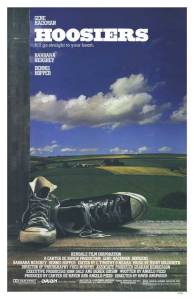 Not just one of the best sports movies ever made, but one of the best movies of any genre, Hoosiers is also a back to school movie.  This 1986 opus embraces the cliches of the underdog sports team, Gene Hackman as a washed up lost soul, and Dennis Hopper as a drunk.  Through all of the reasons this movie could be a failure, it is the exact opposite.

There is an elegant honesty and humility that runs throughout the movie.  Hackman, Hopper and Barbara Hershey trust the script and the situation. This keeps what could be a hackneyed and melodramatic story from losing its honesty.

The actors playing the basketball players were hired more for their basketball ability. With similar haircuts, they sometimes become interchangeable. But instead of being a detriment, instead this becomes one of the assets of the film.  The movie is about a team. While each player has his own story, the more important story is that of the team.

This movie never fails to induce goosebumps and misty eyes each time I watch it.  I KNOW how it is going to end, and I still get caught up in it.  When Gene Hackman measures the distance between the net and the floor to demystify the enormity of the championship arena, I am reminded of the importance of keeping things in perspective.