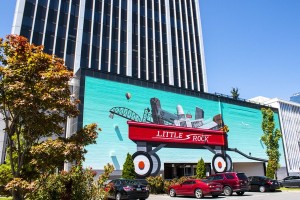 Playtime, Jones’s mural, depicts many features of downtown Little Rock in the playful setting of a child’s red wagon.  This 5,000 square foot mural, on the side of the Union Plaza building, attracted proposals from over 70 artists for the $30,000 commission.

In the fall, Guy Bell painted a mural on the parking deck behind the Arkansas Repertory Theatre.  It depicts Buffalo going up the deck.  The mural is approximately 900 square feet, and the area runs along a ramp that goes up to the second floor of the deck.

Also in the fall, Joel Boyd was selected to paint a mural on the Simmons Tower Garage.  The space contains three sections measuring approximately 28×26 feet, 28×9 feet, and 28×26 feet, and the mural will measure roughly 1,700 square feet. The project is sponsored by Flake & Kelley Commercial and the Simmons Tower ownership.  The design, which depicts thoughts inside a male’s and female’s heads is meant to illustrate a moment of reflection or a quiet moment of peace for the subject.

The DLRP has also sponsored a party to paint the surface of Baker’s Alley as well as commissioned artists to paint doors in that alley.

12 – Women’s Suffrage Sculpture in Riverfront Park.  While 2020 marks the centennial of the formal adoption of the 19th Amendment, 2019 marked 100 years since Arkansas ratified it.  In tribute to that, a new Women’s Suffrage Plaza with a sculpture was dedicated in October.  Jane DeDecker’s Every Word We Utter is the centerpiece of a new plaza inside the Vogel Schwartz Sculpture Garden.

The sculpture is based on the concept of a drop of water not only causing ripples but also rising up again after its impact with the surface. The women are presented in a series of levels, each building on the work done by previous generations.

Other notable sculpture installations in 2019 included Darrell Davis’ Lions Pride in the War Memorial Park roundabout, Ken Newman’s Taking Attendance in the Heights, and Clay Enoch’s Community in Hillcrest.  Davis, DeDecker and Enoch are members of the National Sculptors’ Guild. 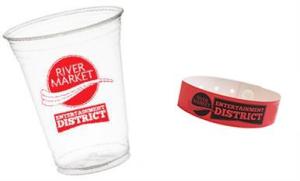 Alcohol may be carried throughout the district during the following times and holidays:

Exceptions to the rules are:

Patrons looking to take alcohol outside of the point of purchase and into public spaces within the District will be required to wear an RMED wristband given to them when they receive their RMED cup. Both cups and wristbands will be available at all participating bars and restaurants within the District. Due to state regulations, alcoholic beverages may not be taken from one bar or restaurant into another. Additionally, visitors to the RMED cannot bring any outside alcohol into the District, nor can any alcohol purchased within the District be taken outside its borders.

October is Arts and Humanities Month nationally and in Little Rock. Americans for the Arts has identified a different arts topic to be posted for each day in the month. Today’s feature is Monuments.

Earlier this month, a monument was dedicated in Little Rock which commemorates the Woman’s Suffrage Centennial.  Jane DeDecker’s Every Word We Utter is the centerpiece of a new plaza inside the Vogel Schwartz Sculpture Garden.

The sculpture is based on the concept of a drop of water not only causing ripples but also rising up again after its impact with the surface. The women are presented in a series of levels, each building on the work done by previous generations. 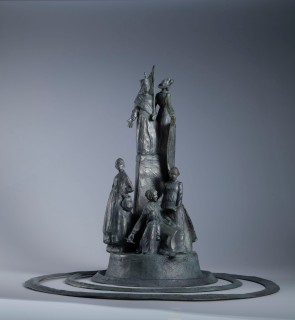 Today, October 10, 2019, Jane DeDecker’s Every Word We Utter sculpture and the Women’s Suffrage Centennial Plaza will be dedicated in the Vogel Schwartz Sculpture Garden in Riverfront Park.

The ceremony will take place at 11:00am. Among the speakers will be Gov. Asa Hutchinson and Mayor Frank Scott, Jr. as well as the sculptor.

In July 1919, in part largely to the leadership of Gov. Charles Brough and First Lady Anne Roark Brough, the Arkansas General Assembly approved the 19th Amendment to the US Constitution, making Arkansas the 12th state of the 36th needed.

Two years earlier, Arkansas had given women the right to vote, but only in party primaries. This was not the first attempt at granting Arkansas women the vote. In 1868, a bill was introduced to allow voting regardless of gender but it failed.

As throughout the United States, the efforts to establish women’s suffrage in Arkansas began prior to the Civil War. By 1869, articles started appearing in local newspapers about women’s suffrage efforts. In 1881, the Arkansas Woman Suffrage Association had been founded. The Arkansas Equal Suffrage Association was created in 1888. Both of these early groups disbanded when their leaders died. However they planted the seeds for future efforts.

The Political Equality League was founded in Little Rock in 1911. That year an amendment to the Arkansas Constitution was proposed which would have granted women the right to vote. While it failed, the effort created momentum, and women’s suffrage leagues were created throughout Arkansas which led to ultimate victory in 1919.

This sculpture features two Arkansas women: Josephine Miller Brown and Julia Burnell “Bernie” Babcock. Brown came to Arkansas to work on the woman’s suffrage movement and decided to make it her home, while Babcock grew up in the state and learned about the suffrage effort as a teenager. Both have descendants in Arkansas to this day. This duo were chosen to represent the many women who worked on the suffrage movement. Some were from Arkansas, others came here–all of them worked for decades in this state to advance the cause of women’s suffrage.