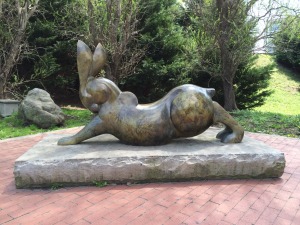 Today is Father’s Day.  In honor of that, today’s Sculpture Vulture revisits Tim Cherry’s Rabbit Reach.  The sculpture was given in memory of two fathers.

The sculpture is located at the corner of Sherman Street and President Clinton Avenue across from the Museum of Discovery.

Cherry’s sculpture was selected for this spot because of its proximity to children at the Museum and in the River Market district.  The design and size of the sculpture encourages children to climb on it and to play around the rabbit.

While some public art is situated so it cannot be touched, this one is situated to be touched as part of the appreciation experience.

Rabbit Reach received national publicity in 2015 when Melissa Joan Hart featured it on her social media while she was in Little Rock filming a movie. 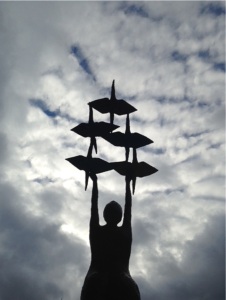 In 2011, the group started a public monument competition. The first three annual winners were all placed in Riverfront Park. Lorri Acott won the 2014 competition for her sculpture Peace.  Instead of being placed in the park, it was installed at the southeast corner of the intersection of Second and Main Streets.

It has quickly become a focal point in downtown Little Rock.

The 2015 public monument competition was won by Michael Warrick. It will be placed on Chenal Parkway at Chenal Village Drive.

Also in 2015, the sculptures downtown started attracting attention.  Actress Melissa Joan Hart and singer Tim McGraw both took to social media to highlight Little Rock sculpture while they were visiting Little Rock.  McGraw highlighted the pig sculpture at the River Market while Hart praised Rabbit Reach at the corner of President Clinton Avenue and Sherman Street.