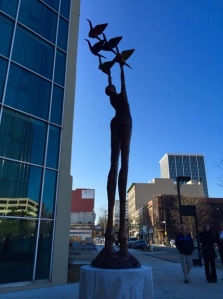 On January 26, 2015, the City of Little Rock and Sculpture at the River Market installed Lorri Acott’s PEACE sculpture at the southeast corner of the intersection of Main Street and Second Street.

Peace was the winner of the 2014 Sculpture at the River Market Show and Sale public monument competition. The 12-feet-tall sculpture is made of bronze. It features a human figure standing with hands outstretched over its head. In between the hands is an arc made up of origami cranes.

The Sculpture at the River Market Committee commissioned the $60,000 sculpture and donated it to the City of Little Rock. “Peace” is made of bronze and features a long silhouette with colorful bronze origami cranes, known as symbols of peace and hope.

The sculpture design has won several accolades, including an “Art to Change the World” award from the American Civil Liberties Union and the 2014 World Citizens Artist Award from an international competition featuring art inspired the theme of peace.

On January 16, 1916, future Little Rock Mayor Martin Borchert was born in Stuttgart.  After graduating high school he moved to Little Rock.  During World War II, he served as a bomber.  He started work at ACME Brick and spent 21 years there before engaging in other business interests.  Among these businesses were Martin Borchert Co., ASCO Hardware, Detection Systems Inc. and Component Systems Inc.  In 2005 he was inducted into the Arkansas Construction Hall of Fame.

Mayor Borchert was elected to the Little Rock City Board of Directors in 1964 and served from January 1965 through December 1968. He chose not to seek a second term.  In 1967 and 1968 he served as Mayor of Little Rock. During this time, he laid out the vision for what has become Riverfront Park along the Arkansas River.

Other civic achievements included being a member of the Board of the Little Rock Chamber of Commerce, being on the Governor’s Citizens Advisory Committee, a member of the Pulaski County Quorum Court, vice chairman of the Arkansas Planning Commission, and being on the Little Rock Air Force Base Community Council. In 1967 he served on the President’s National Advisory Council to the Small Business Administration.

Mayor Borchert was married for 57 years to Rosemary “Biddy” Branch Borchert.  They had two children, a son, John “Topper” Borchert and a daughter, Leslie Borchert Wilson.  He died on May 11, 2007.

On January 3, 1936, the ground was broken for the Museum of Fine Arts building in City Park.  The facility would face Ninth Street and be to the west of the Arsenal Tower Building.   That building was the one remaining structure of more than 30 which had populated the grounds when it was a federal military establishment.

Excavation for the building uncovered the foundation for another structure.  New footings for the Museum would be poured into the old footings.

The cornerstone would be laid in October 1936, and the building would open in October 1937.  The building would serve as the museum’s home until the new construction for the new Arkansas Arts Center began in 1961. That construction would enclose the original Museum of Fine Arts.  By that time, the City had long renamed the park in honor of General Douglas MacArthur, who was born there when it had been a military installation.

Subsequent additions to the Arkansas Arts Center over the decades have further expanded the museum’s footprint.  After the 2000 expansion, the original 1937 facade was featured prominently in a gallery, giving it more visibility than since 1963. With the Arkansas Arts Center undergoing a reimagining, the original 1937 facade will be maintained and re-exposed as an entrance to the building.

You are invited to join the Arkansas Historic Preservation Program’s next “Sandwiching in History” tour, which will visit one of Little Rock’s oldest standing structures, the Arsenal Tower Building, now home to the MacArthur Museum of Arkansas Military History on 9th Street in MacArthur Park in Little Rock beginning at noon on Friday, December 6, 2019.

This structure was built as part of a federal military installation. The U.S. Arsenal is the only building that remains of the more than 30 that made up the original installation. After 1892, the arsenal grounds became City Park and later MacArthur Park in 1942.

The two-story brick building displays a slight Gothic influence in a centered octagonal entry tower. Symmetrical east and west wings display two-story full porches. For several decades, the building was endangered, but the City of Little Rock undertook a renovation project in the 1930s. The U.S. Arsenal currently houses the MacArthur Museum of Arkansas Military History.

Sandwiching in History tours are worth one hour of AIA continuing education credit. If you would like to receive email notifications of upcoming tours instead of postcards or need additional information, please contact Callie Williams, Education and Outreach Coordinator for AHPP, at 501-324-9880 or Callie.Williams@arkansas.gov.

Join the Little Rock Parks and Recreation Department as they welcome acclaimed journalist Hampton Sides at the MacArthur Museum of Arkansas Military History.

Sides is best-known for his gripping non-fiction adventure stories set in war or depicting epic expeditions of discovery and exploration including the bestselling histories Ghost Soldiers, Blood and Thunder, Hellhound On His Trail, In the Kingdom of Ice, and, most recently, On Desperate Ground about the greatest battle of the Korean War.

He’ll be speaking about On Desperate Ground, which features Little Rock’s John Yancey, whose family shared his notes and letters with the author. Hampton will also be signing books.

The program begins at 12 noon. 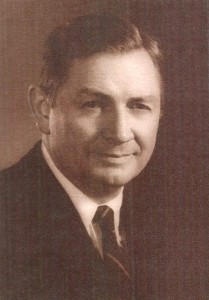 One hundred and four years ago today, on October 26, 1915, future Little Rock Mayor Pratt Cates Remmel was born.  He was one of five children of Augustus Caleb and Ellen Lucy Remmel.  His father died when he was five, leaving his mother to raise six children (Gertie, Harmon – also known as Buck, Pratt, Gus, Rollie, and Carrie) by herself.  After graduating from high school in 1933, he received a bachelor’s degree in economics from the University of Virginia in 1937.  During World War II, he held the rank of Lieutenant in the US Navy.

The Remmel family had long been involved in politics.  A great-uncle had been the GOP nominee for governor and senator as well as serving on the GOP national committee.  Remmel’s father had been the state GOP chair and his mother was the Arkansas Republican national committeewoman for nearly three decades.  In 1938, shortly after returning from college, Remmel ran for the Little Rock City Council but did not win.  In 1940, he became chairman of the Pulaski County Republican Executive Committee. For the next several decades, he held various leadership posts in the GOP at the county, state and national level.

Remmel made his second bid for public office in 1951 when he challenged incumbent LR Mayor Sam Wassell, who was seeking a third term.  Wassell shared the often held belief at the time that the GOP could not win any races in Arkansas because of the aftereffects of Reconstruction.  Remmel ran a vigorous campaign and won by a 2-to-1 margin becoming Little Rock’s first Republican mayor since Reconstruction.  In 1953, he sought a second two year term and was re-elected.  Though he had worked to build the GOP in Arkansas, he did not emphasize party affiliation in this campaign. He stressed he had been “fair to all and partial to none.”  This campaign included a rally which was aired live on six LR radio stations at the same time, a first for Arkansas. He won by over 3,000 votes this time over alderman Aubrey Kerr.

Remmel had been mentioned as a potential candidate for US Senate or Congress in 1954.  Instead, he ran for governor and was defeated by Orval Faubus in his first race for the office.  Remmel did receive more votes for governor than any GOP candidate had since reconstruction.  He is credited with laying the groundwork for the future successful campaigns of Winthrop Rockefeller.

A month before the election in 1955, Remmel announced he would seek a 3rd term as Mayor.  While later admitting he should have stuck with the customary two terms, he also said he ran to give voters an alternative to the Democratic nominee Woodrow Mann.  Mann, like Remmel, was in the insurance business; Remmel considered Mann to have a questionable reputation.  Several statewide Democratic leaders campaigned for Mann, who beat Remmel by 1,128 votes, one of Little Rock’s closest mayoral elections.

As Mayor, Remmel served in leadership positions with the US Conference of Mayors and the Arkansas Municipal League.  It was during his tenure as mayor that the land which is now Rebsamen Golf Course was given to the City.

After he left office, Remmel returned to business interests and staying active in civic affairs.   He was an active leader of First United Methodist Church and Gideons International.  He was a Mason, a Shriner, a member of the American Legion, and the American Red Cross.   Remmel served on the Arkansas River Basin Commission and chairman of the Arkansas Waterways Commission.  In 1996, he was posthumously inducted into the Arkansas River Hall of Fame.

Married for many years to Catherine Couch, the couple had three children, Pratt Jr., Cathie and Rebecca.  Lake Catherine in Arkansas is named for his wife. Remmel Park and Pratt Remmel Road in Little Rock are named for Mayor Remmel.

The original seven sculptures. Clockwise from top left: Conversation with Myself; Straight and Narrow; Bateleur Eagle; First Glance; Sizzling Sisters; Cascade; and Full of Himself

After nearly a week of rain, the skies dried up and on Friday, October 16, 2009, the Vogel Schwartz Sculpture Garden was dedicated.

Designed and created by the staff of the Little Rock Parks and Recreation Department, the Vogel Schwartz Sculpture Garden started with seven sculptures. These were purchased at the 2007 and 2008 Sculpture at the River Market Show and Sales.

The original seven were: Full of Himself by Jan Woods, Cascade by Chapel, Bateleur Eagle by Pete Zaluzec, Sizzling Sister by Wayne Salge, Conversation With Myself by Lorri Acott, First Glance by Denny Haskew, and Straight and Narrow by Lisa Gordon.

The sculpture garden was named after the Vogel Schwartz Foundation in recognition of its contributions to the project. The garden was dedicated on the afternoon of the preview party for the 2009 Show and Sale.

The 2020 Sculpture at the River Market “A Night in the Garden” party will take place on Friday, April 17, 2020, in the Vogel Schwartz Sculpture Garden.