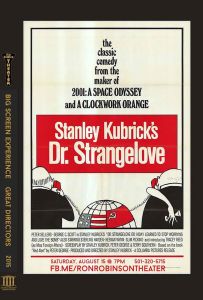 Stop worrying and learn to love the bomb with Stanley Kubrick’s black (& white) comedy Dr. Strangelove, or How I Learned to Stop Worrying and Love the Bomb. It will be shown this evening at 7pm at the CALS Ron Robinson Theater.

This 1964 film both satirizes and foreshadows Cold War mentality and decisions.  It stars George C. Scott and Peter Sellers (who essays three roles including the title Edward Teller-inspired character).  Others in the cast include Sterling Hayden, Keenan Wynne, Peter Bull, James Earl Jones and Slim Pickens – who has the ride of his life.

The film was produced and directed by Kubrick from a script he wrote with Terry Southern and Peter George.  Kubrick was nominated for three Oscars (producer, director and adapted screenplay).  The film’s fourth Oscar nomination went to Sellers as Best Actor.

In 1989, the United States Library of Congress included it in the first group of films selected for preservation in the National Film Registry.

Admission is $5, with refreshments available for purchase.