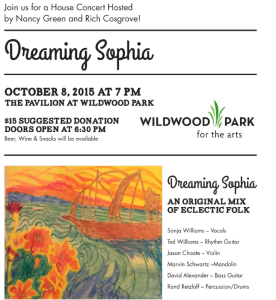 Dreaming Sophia will close out the Wildwood House Concert series tonight under the Pavilion on October 8 at 7 pm.

Dreaming Sophia came into being around six years ago.  Ted Williams had been a percussionist and flutist for many years when he picked up a guitar and transferred his knowledge and experience with world rhythms to a new chordal medium.  His wife Sonja would hear him combining chord with time, and inspired, began writing lyrics and melody lines to accompany his rhythm guitar.

The husband and wife song-writing team soon joined with violinist, Jason Choate, and proceeded to create an extensive repertoire of songs with gypsy, folk, jazz and alternative rock roots.   Drawing on universal themes with an Ozark twist, the song list expanded, as did the band.  Marvin Schwartz added mandolin, David Alexander brought in bass and, most recently, the band added Rand Retzloff’s drumming and percussion.

The songs of Dreaming Sophia are eclectic.  They are philosophically lyrical, yet as down to earth as an Arkansas morning.  Whether illustrating rekindled romance, the excitement of a child at a Southern fair, or coming back home, the songs pay tribute to longing, love, remembrance and compassion.

Admissions is a $15 suggested donation; doors open at 6:30 pm.  There will be beer, wine and snacks available for purchase.

It all begins tonight at 7:30 pm at The Studio Theatre. For only a $10 cover, experience the joy of Meshugga Klezmer Band (Meshugga.org)

Meshugga Klezmer Band was formed in Little Rock in 1999 and has performed with the Arkansas Symphony Orchestra, for bar/bat mitzvahs, weddings, and at Jewish food festivals, Juanita’s Cantina, Wildwood Park, the Afterthought Lounge, Acoustic Sounds Café, and private parties.  They have played on the stage of both the Joseph Taylor Robinson Memorial Auditorium and the Ron Robinson Theater.

Klezmer music has eastern European Jewish folk roots and is characterized by the cantorial, vocal, often crying style reminiscent of Jewish prayer. Like the cantor, the lead musicians sob, laugh, and slide from note to note.

Tonight’s installment of Local Live features the fabulous Meshugga Klezmer Band! Presented by the Oxford American magazine, Local Live showcases the best of local and regional music talent and is always free and open to the public. Call ahead to South on Main to make your reservations and ensure a table: (501) 244-9660.  The music starts at 7:30 p.m.

The Meshugga Klezmer Band was formed in Little Rock in 1999. They are still to this day Arkansas’ only klezmer band. Klezmer music has eastern European Jewish folk roots and is characterized by the cantorial, vocal, and emotional style reminiscent of Jewish prayer. Like the cantor, the lead musicians sob, laugh, growl, and slide from note to note. Meshugga Klezmer Band has performed with the Arkansas Symphony Orchestra, for Bar/Bat Mitzvahs and weddings, and at local festivals, lounges, and private parties.