The ASO is proud to present Beethoven and Blue Jeans, featuring the works of two Arkansan composers, Florence Price and William Grant Still, and Beethoven’s Symphony No. 3 “Eroica.”  Beethoven and Blue Jeans is sponsored by The DoubleTree Hotel. The Masterworks Series is sponsored by the Stella Boyle Smith Trust.  The concerts will be under the baton of guest conductor Andrew Grams.

Interim Artistic Director, Geoffrey Robson, gives these notes: “Beethoven and Blue Jeans will feature your Arkansas Symphony performing two works by 20th century African-American composers with deep Little Rock roots. William Grant Still’s Festive Overture is a lively march that passes the virtuosic torch around to all sections of the orchestra. Florence Price is rapidly gaining long overdue notice for the powerful late-romantic style and unique harmonic idiom of her compositions; her music will be interpreted by guest artist pianist and scholar Karen Walwyn. The second half of the program is filled by Beethoven’s Heroic Symphony, a beloved work representing the dividing line between the Classical and Romantic eras.”

All people with a ticket to Beethoven and Blue Jeans are invited to the annual pre-concert street party: Symphony Local. The party is on W Markham St in front of the Robinson Center starting at 5:30 on Saturday and 1:00 on Sunday. ASO will serve free brats, Stone’s Throw Brewery will sell beer, and music will be provided by the Episcopal Collegiate Steel Drum Band, under the direction of ASO percussionist Erick Saoud. The Arkansas Food bank collect non-perishable food donations, and will provide any patrons who bring 10 items or more will receive a voucher good for two best available tickets to a future Masterworks or Pops Live! concert. To learn more visit http://www.ArkansasSymphony.org/party

Tickets are $16, $36, $57, and $70; active duty military and student tickets are $10 and can be purchased online at www.ArkansasSymphony.org; at the Robinson Center street-level box office beginning 90 minutes prior to a concert; or by phone at 501-666-1761, ext. 1. All Arkansas students grades K-12 are admitted to Sunday’s matinee free of charge with the purchase of an adult ticket using the Entergy Kids’ Ticket, downloadable at https://www.arkansassymphony.org/freekids.

The Oxford American magazine is excited to welcome Amy Helm to the South on Main stage!

This event kicks off their 2019-2020 Concert Series and is the first show of their Americana Sub-Series. Doors open at 6:00 PM, with dinner and drinks available for purchase at that time. The series is made possible in part by presenting sponsor Stella Boyle Smith Trust, as well as their season sponsor University of Arkansas for Medical Sciences.

There are no tickets available at this time. Please visit the venue on the night of the show when doors open to inquire about any potential ticket releases.

Amy Helm sought what she calls a “circular sound” for her new album. It’s a well-rounded one, marked by streaks of Americana, country, blues, and gospel, and the kinds of four-part harmonies that can burst open a melody and close the loop of an octave. It’s a sound that represents the feeling of community.

This Too Shall Light, released September 2018 on Yep Roc Records, comprises ten songs produced by GRAMMY-winning producer and songwriter Joe Henry. During the four-day session in Los Angeles, the musicians were directed not to overthink the songs, and Helm herself barely performed any of the selections while preparing to record. As a result, the sessions forced fast musical trust among the collaborators and yielded the vibrant instrumental improvisations heard throughout This Too Shall Light.

Although a profound songwriter herself, Helm and Henry jointly arranged a diverse collection of songs for the record, which range from Rod Stewart’s “Mandolin Wind” to Allen Toussaint’s “Freedom for the Stallion” and even the Milk Carton Kids’ “Michigan.” The title track in particular, written by Hiss Golden Messenger’s MC Taylor and Josh Kaufman, is a brilliant summation of the record’s sound and spirit.

Helm’s voice veers from commanding to supplicating within a single soulful verse, as she manipulates that message so that light leads throughout even the darkest of times.

Helm’s parents—The Band’s legendary drummer and singer Levon Helm and singer/songwriter Libby Titus—guided her training and influences. A lifelong musician and music-lover, she later became a founding member of the alt-country collective Ollabelle and served as a backing musician in her father’s Midnight Ramble Band. On This Too Shall Light, Helm says that two songs in particular pay homage to Levon—“The Stones I Throw,” a song he released in 1965 with Levon and the Hawks, and the closing traditional number, an a cappella version of the hymn “Gloryland,” which was passed from father to daughter.

While This Too Shall Light is only Helm’s second album under her own name, it serves as a comprehensive portrait covering her life’s journeys and recoveries; these songs are stories that, no matter where they take her, seem to end and begin in the same place like a circle. 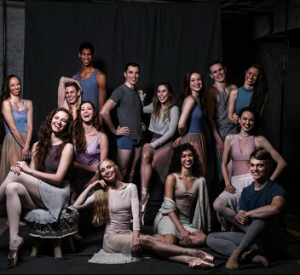 Presented by the Stella Boyle Smith Trust, Ballet Arkansas’ “Forte” celebrates the 2018/2019 season, with the return of our wildly popular collaboration with internationally acclaimed pianist, Dr. Drew Mays. This dynamic mixed repertory program is a refreshing mix of contemporary and classical dance that is the perfect season finale for the 40th anniversary season.

“We are thrilled to continue the Ballet Arkansas in Concert series, sponsored by the Stella Boyle Smith Trust, which pairs high profile works of classical and contemporary dance with musical accompaniment from world renowned musicians. This series brings works to the State of Arkansas not ever performed within the region, while also placing Ballet Arkansas on par with the repertoire of larger ballet companies on the national scale,” says Catherine Fothergill, Associate Artistic Director.

A brilliant finish to the 2018/19 40th Anniversary Season, Forte! offers the audience a new and rich experience, providing powerful artistic collaborations that will elevate the arts in our community. “Forte” premieres at UA Pulaski Tech CHARTS Theater on the weekend of May 3-5, 2019.

The Oxford American welcomes the Peter Bernstein, Larry Goldings & Bill Stewart Trio to Little Rock! This is the fifth and final show in their 2018-19 Jazz Series. Doors open at 6:00 PM, with dinner and drinks available for purchase at that time.

The series is made possible in part by presenting sponsor UCA College of Fine Arts & Communication.

Guitarist Peter Bernstein, organist Larry Goldings, and drummer Bill Stewart make up one of the best organ jazz trios of the past two decades. The respect the musicians have for one another comes through in the subtle and intricate manner of their musical conversation on stage. Indeed, you can hear them listening to each other. Drawing mainly on jazz standards, and a few original pieces, they re-imagine the organ jazz trio in a quiet, sensual, and grooving presentation.

All members of the Young Lion jazz movement at the close of the 20th century, and now all firmly established jazz stars, this group has been together for twenty-five years, making multiple recordings that display their distinctive sound, whether exploring the depths of jazz standards, or playing their original compositions. Jazz enthusiasts recognize the trio for charting new ground with hard-swinging, yet thoughtful music. Peter’s warm, feather-light touch and fluid improvisation with Larry Goldings’s warm hum, alongside Bill Stewart’s polyrhythmic and melodic focus, create a vivid combination of synergistic playing. With the trio’s extensive use of the music’s dynamic possibilities, the passion and joy of this amazingly versatile instrumental lineup is there for all to hear. 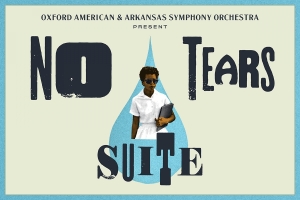 Today (March 1) at noon – a free panel discussion presented in collaboration with the National Park Service and Clinton School of Public Service will be held at Central High School National Historic Site.

Featuring  Rufus Reid, Kelley Hurt, and Bobby LaVell, the panel will be moderated by composer Chris Parker. The goal is to facilitate discussion on the ongoing work of social equity in the United States from the perspectives of people living in different communities and what role music and the arts play in affecting change in our society today.

This project is generously funded by the Stella Boyle Smith Trust, Mid-America Arts Alliance, the National Endowment for the Arts and the state arts agencies of Arkansas, Kansas, Missouri, Nebraska, Oklahoma and Texas.

Performances of “No Tears Suite” will take place on Saturday at Mosaic Templars Cultural Center and Sunday at Central High School.

Dom Flemons is originally from Phoenix, Arizona and currently lives in the Washington, D.C. area. He is known as “The American Songster” since his repertoire of music covers nearly 100 years of American folklore, ballads, and tunes. Flemons is a music scholar, historian, record collector and a multi-instrumentalist.

This is the third show in their 2018-19 Americana Series. Doors open at 6:00 PM, with dinner and drinks available for purchase at that time. The series is made possible in part by presenting sponsor Stella Boyle Smith Trust.

In partnership with the Stella Boyle Smith Trust, Ballet Arkansas is excited to present a three – year concert series, Ballet Arkansas in Concert, which pairs high profile works of classical & contemporary dance with musical accompaniment from world renowned musicians in the Spring of each year.

In between pieces, Dr. Mays will present an engaging and stimulating discussion that highlights the lives of the composers, the finer points of their music, and our collaboration. After the completion of the dancing, Dr. Mays will continue to play a solo concert for Ballet Arkansas audiences to enjoy.