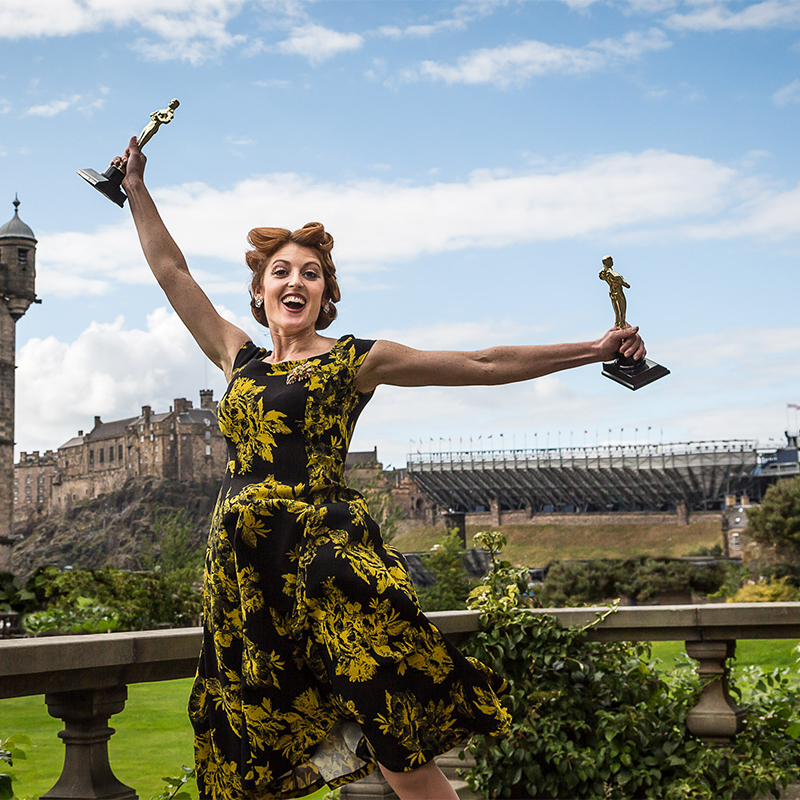 ACANSA Arts Festival of the South continues through this weekend. Among the offerings tonight is Jessica Sherr’s Bette Davis Ain’t for Sissies

Written by and starring Jessica Sherr, Bette Davis Ain’t for Sissies is an up close and personal “conversation” with the two-time Oscar-winning and ten-time Oscar-nominated actress, Bette Davis. This 90-minute one-woman show escorts audiences to the 1939 Academy Awards. Miss Davis, nominated for Best Actress in the film “Dark Victory,” is pitted against Vivien Leigh in “Gone with the Wind.” When The Los Angeles Times leaks the Oscar winners, what will the bold, defiant and disillusioned Bette Davis do next?
www.bettedavisaintforsissies.com

The performance is tonight (September 26) at 7pm at the Argenta Community Theater.

Last week, ACANSA announced the highlights for for the Sixth Annual ACANSA Arts Festival of the South.  The 2019 edition has a slightly different format taking place on three successive weekends in September.

Visit the ACANSA website for ticket ordering.  Watch for more things to be added.

Yesterday’s movie featured Bette Davis cast against type as a frump.  Today’s movie marks her transition into character parts.  It is 1961’s Pocketful of Miracles which was Frank Capra’s final movie.  Davis plays Apple Annie, a homeless woman who shakes down the other panhandlers in NYC.

In the complicated plot (based on a Damon Runyan story) Ann-Margret plays Davis’ daughter who has never met her because she has been away at boarding school in Switzerland (paid for with proceeds from Davis and her cohorts).  Glenn Ford and Hope Lange play a friendly gangster and his moll. Thomas Mitchell, Peter Falk, Edward Everett Horton, Arthur O’Connell and Sheldon Leonard.

Ford, Lange and Mitchell help Davis pass herself off as a society matron during her daughter’s visit. But of course, mayhem ensues.  It is a witty story filled with its share of Capraesque moments as people do the right thing for the right reasons.

Peter Falk nabbed an Oscar nomination for his wise-cracking portrayal of Joy Boy, one of Ford’s henchmen.  The film was the last for Mitchell, who once again played a lovable Irish drunk as he had in Gone with the Wind, It’s a Wonderful Life, Stagecoach (winning and Oscar) and so many other films.  Ann-Margret is, well, Ann-Margret.  While Ford and Lange may simply walk through their parts, they are affable, relaxed performers who seem to be enjoying the company.

Davis would later become a caricature of herself. But in this movie there are still flashes of brilliance.  She spends much of the movie looking unglamorous. But when she emerges as a regal society grand dame, it is clear that she still can command a room.

The climax of the movie takes place on Christmas Eve. Capra’s message of hope and redemption fits well within this setting.

What if you had a horrible house guest, and they would never leave?  That was the premise which launched Moss Hart and George S. Kaufman to write The Man Who Came to Dinner.  This rip-roaring stage play was made into a 1942 movie starring Monty Woolley, Bette Davis (cast against type as a frump) and Ann Sheridan.  In it Woolley plays a high-maintenance famous personality who is stuck as a guest in a house in small town Ohio due to an injury.

Others in the cast include Jimmy Durante, Billie Burke, Mary Wickes, Richard Travis, Grant Mitchell, and Reginald Gardner.  This is definitely a period piece rife with references to people and events in the 1930s and early 1940s.  But it is a lot of fun.  Woolley gleefully skewers everyone and everything in sight as he plots and plans ploys.

Most Kaufman and Hart plays and movies have underlying social themes or pertinent messages. This one does not.  Its only aim is to have fun.  Brothers Julius J. Epstein and Philip G. Epstein, do a good job of condensing the Kaufman & Hart play into a 90 minute movie without losing the bite or the wit.

Why is it a Christmas movie?  It takes place at Christmastime. A Christmas Eve radio broadcast is a plot point that provides a great deal of upheaval for the characters. In addition, a unique Christmas present serves as one half of a deus ex machina that helps wrap up the plotlines nicely.