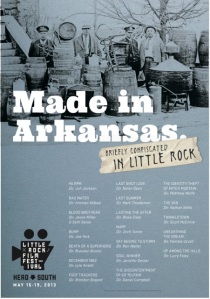 The ‘Made in Arkansas’ category is a center piece of the Little Rock Film Festival created to showcase the very best film works being produced in the state.  All films in competition are Arkansas premieres.

LRFF2013 is proud to present the following 19 films in the ‘Made in Arkansas’ category that will each compete for the:

45RPM – directed by Juli Jackson, Category: Feature (97 min)
An artist struggling with the source of her inspiration finds help from an obsessive record collector in the search for her deceased father’s lost music.

Bad Water – directed by Amman Abbasi, Category: Shorts (13 min)
DB is a mentally handicapped man who lives in an isolated town, and struggles with health issues. Through his straightforward and unbiased narration, we soon realize that he is one of the key surviving members of a community that was devastated by water contamination. With a poetic and personal tone, Bad Water challenges the nature of man and his inability to do good for himself.

Blood Brothers – directed by Jason Miller and Seth Savoy, Category: Shorts (32 min)
A young man returns to his hometown in Arkansas to kidnap the kingpin of the drug operation that ran him and his brother out of town; however, his actions may not bode too well for his brother, who now leads a clean and successful life in Chicago.

December 1982 – directed by Lyle Arnett, Category: Shorts (30 min)
In the early 1980s, Tim Edwards, a newly high school graduated, becomes friends and pen-pals with a young girl of the same age form Lebanon. When her world is thrown into chaos by war, Tim begins to understand what is really important in life.

Death of a Super Hero – directed by Brandon Bristol, Category: Shorts (10 min)
Death of a Superhero is the story of John Jameson, the alter ego of Metro City’s greatest superhero, Captain Amazing. One night after a devastating battle with his arch-nemesis, Doctor Disaster, John loses his powers. Now, John has to learn to cope with the loss of his identity, and weigh the part that has been left behind.

Foot Trackers – directed by Brandon Bogard, Category: Shorts (7 min)
Bigfoot hunters Sam and Matt have Bigfoot almost in their grasp. But when Matt blows their big chance at catching him, they return to camp and Bigfoot surprises them and destroys their camp and equipment. Barley making it out a live they must work together to find a way to catch the legendary Bigfoot.

Lasting the After – directed by Blake Elder, Category: Shorts (21 min)
Three outcasts struggle with survival during the tribulation. Lasting The After is a drama thriller that tells the story of two siblings Mila & Gavin, outcasts, who find themselves hiding in an abandoned warehouse, in the middle of enemy territory, struggling to survive during the tribulation. After encountering a mysterious companion, and eluding the wrath of the Disciples, they begin to discover the only substantial way to survive is to flee to the mountains.

Last Summer – directed by Mark Thiedeman, Category: Feature (73 min)
Two high school sweethearts, Luke and Jonah, spend their final months together over the course of a long, quiet summer in the rural South–a world of baseball, bicycles, church and green bean casserole–contemplating their uncertain future and the uncertain future of America.

Last Shot Love – directed by Nolan Dean, Category: Shorts (14 min)
Meet love-struck Michael; a 30 year old who has been waiting ten years to express his love for Annie. When he persuades her that ‘they owe it to their friendship’ to go on one official date, he asks for the advice from Collin. Together they hatch a fool-proof plan to make Annie fall in love with Michael, and it all goes terribly wrong.

Mary – directed by Zach Turner, Category: Shorts (25 min)
Divorced and alone, Craig meets the ethereal Mary, who might be the girl of his dreams. Now he just needs to find out if he’s awake.

Sky Begins to Storm – directed by Ron Walter, Category: Shorts (19 min)
Sky Begins to Storm is a documentary that takes a look at the 2011 April and May tornado outbreaks and how they affected the towns of Vilonia, Arkansas and Joplin, Missouri. At its core though, the film is about revisiting communities after the destruction of a physical space and the efforts to preserve the memories attached to the remains of a town. Several interviewed citizens of both towns touch on the topics of moving with their lives, the deaths of friends and family members, and the conscious effort to begin putting a town back together. Sky Begins to Storm takes place in the somber space after the headlines and news vans have stopped paying attention to a crisis.

Soul Winner – directed by Jennifer Gerber, Category: Shorts (13 min)
A young door-to-door preacher learns that winning souls for Jesus truly is a matter of life and death. Set in the rural Bible belt of Arkansas, Jesse, a young door-to-door minister, wants to win his first soul for Jesus, but his lack of experience and volatile enthusiasm is getting in his way. Before heading home from another failed mission, Jesse decides to try to convert one last soul before giving up for good.

The Van – directed by Nathan Willis, Category: Shorts (7 min)
Aaron Reddin’s mission in life is to serve the unsheltered homeless in Arkansas and across the southeast. Everyday he drives ‘The Van’ to different homeless camps to bring food, water, and supplies to the men and women living there.

The Identity Theft of Mitch Mustain – directed by Matthew Wolfe, Category: Feature (90 min)
In 2005, Mitch Mustain was the most decorated high school football player in all of America.  Named the first ever consensus Gatorade, Parade, and USA Today Player of the Year, Mustain grabbed the spotlight from future NFL players such as Tim Tebow and Matthew Stafford.  At the age of seventeen, USA Today ordained Mustain as “Football’s Future”.  He was destined to become a game-changing college and pro quarterback.  Unfortunately, football was not the only thing Mitch saw in his future, and while the game came easy to Mitch, finding joy in the game eventually became a job.  The film, narrated by Nolan Richardson, follows Mitch’s present-day struggle to find balance between who he once was, and who he now wants to be.

TwinkleTown – directed by Scott McEntire, Category: Shorts (21 min)
Deep in the Arkansas delta, the Wallace family has been in charge for more than a hundred years. Not everybody in town is willing to accept the dead-end doldrums of life in a small town, and some will do anything to escape. Desperation leads to bad choices, and sympathy is one quality Eve Wallace doesn’t possess. When old money and new issues collide, it isn’t about who will win and who will lose. It’s about who survives and who escapes.

Up Among the Hills – the story of Fayetteville – directed by Larry Foley, Category: Shorts (55 min)
This is a one-hour documentary on the history of Fayetteville, Arkansas, narrated by one of the city’s former residents, President Bill Clinton. Created by master story teller, Larry Foley, this film chronicles the history of the city as told through interesting characters that lived in Fayetteville and pushed it to prominence at the national level. Some of these residents included friend of Buffalo Bill and frontier scout Charles VonBerg, author Charles Finger and business owner and newspaper publisher Roberta Fulbright. The film premiered at the Fayetteville Library in October, 2012.

Unearthing the Dream – directed by Pamela Uzzell, Category: Shorts (53 min)
A small-town African American community, forced to accept second-class materials for its schools, refuses to accept a second-class education for its children, giving rise to Black schools that inspired and cultivated success and pride. The 1968 desegregation of the Malvern, AR schools planned to eliminate this separate and unequal system. But in the process it forced the very students it aimed to help to sacrifice their shared experience and identity. These formative years that most Americans recall with fond memories were stripped away, for the greater good of integration. Forty years have passed, and those boys and girls are men and women. Yet they continue to grapple with the memory of this decision made for them, a memory that still reverberates throughout their lives.

All screenings for the LRFF2013 (May 14th – May 19th, 2013) will be held in downtown Little Rock/NLR this year. The festival schedule will be announced soon. Stay connected with us onFacebook and Twitter for more updates as we close in on LRFF2013.

Book your passes to the LRFF2013 at the Box Office.

If you have any questions, please email us at info@littlerockfilmfestival.org