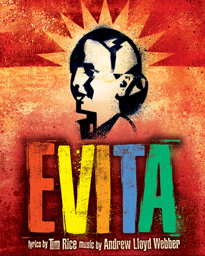 The musical is at Robinson Center Performance Hall tonight (March 15), two performances on March 16, and on the afternoon of March 17.

Eva Duarte Peron rises from poverty to become an Argentinian actress and the wife of powerful President Juan Peron. Through a series of flashbacks, Eva transforms from an impoverished teenager into a woman of influence and power. After the death of her father, Eva travels to Buenos Aires and begins a string of relationships with powerful men before she meets Juan. Eva’s ultimate power and influence earn her both admiration and hatred.

The production includes such hits as “Don’t Cry for Me, Argentina” and “High Flying, Adored” as well as the song “You Must Love Me” which was written for the film version.

The 2018-2019 season marks 20 years that Celebrity Attractions has been bringing touring Broadway shows to Little Rock.  Next season’s lineup consists of five musicals including the return of some old favorites and two shows which are new to Little Rock but bring familiar characters.

Up first is JERSEY BOYS, the 2006 Tony winner for Best Musical.  Telling the story of the rise of Frankie Valli and the Four Seasons, it makes a return visit to Little Rock from October 12 to 14.

Go behind the music and inside the story of Frankie Valli and The Four Seasons in the Tony Award®-winning true-life musical phenomenon, JERSEY BOYS. From the streets of New Jersey to the Rock and Roll Hall of Fame, this is the musical that’s just too good to be true.

Next is Andrew Lloyd Webber’s LOVE NEVER DIES.  This is the long-anticipated sequel to The Phantom of the Opera.  It will be on stage at Robinson Center from November 20 to 25, 2018.

Ten years after disappearing from the Paris Opera House, The Phantom has a new life in New York where he lives amongst the joy rides and freak shows of Coney Island. Christine Daaé, now one of the world’s finest sopranos, is coming to perform in New York. In a final bid to win back Christine’s love, The Phantom lures her, Raoul, and their young son to the glittering and glorious world of Coney Island… not knowing what is in store for them….

Another familiar character returns to Robinson in a new show when Peter Pan comes back. This time, it is FINDING NEVERLAND which explores the origins of the Peter Pan story.  It will be at Robinson on December 22 and 23.

Playwright J.M. Barrie struggles to find inspiration until he meets four young brothers and their beautiful widowed mother. Spellbound by the boys’ enchanting make-believe adventures, he sets out to write a play that will astound London theatergoers. With a little bit of pixie dust and a lot of faith, Barrie takes this monumental leap, leaving his old world behind for Neverland, where nothing is impossible and the wonder of childhood lasts forever. The magic of Barrie’s classic tale springs spectacularly to life in this heartwarming theatrical event.

The music of Andrew Lloyd Webber returns to Robinson for the second time in the season with EVITA.  Winner of the 1980 Tony for Best Musical, this show (with book and lyrics by Tim Rice) will be at Robinson from March 15 to 17, 2019.

Eva Perón used her beauty and charisma to rise meteorically from the slums of Argentina to the presidential mansion as First Lady. Adored by her people as a champion for the poor, she became one of the most powerful women in the world—while her greed, outsized ambition and fragile health made her one of the most tragic. Evita tells Eva’s passionate and unforgettable true story, and features some of theater’s most beautiful songs, including “Don’t Cry for Me Argentina,” “Another Suitcase in Another Hall” and “High Flying, Adored.”

he last show of the Celebrity Attractions season at Robinson Center is the Richard Rodgers and Oscar Hammerstein II classic THE SOUND OF MUSIC.  Winner of the 1960 Tony for Best Musical, it will be at Robinson Center from May 24 to 26, 2019.

This classic musical is 59 going on 60 in the year 2019.  With a book by Pulitzer winners Howard Lindsay and Russel Crouse and songs by Rodgers and Hammerstein, Robinson Center will truly be alive with the sound of music.  The spirited, romantic and beloved musical story of Maria and the von Trapp Family will once again thrill audiences with its Tony®, Grammy® and Academy Award®-winning Best Score, including My Favorite Things, Do-Re-Mi, Climb Ev’ry Mountain, Edelweiss and the title song.

Next year the Arkansas Repertory Theatre celebrates its 40th anniversary season.  Since its first season, the Rep has often programmed plays and musicals which have been recognized with the Tony for Best Play or Best Musical of the season.

Many other Rep productions have been titles which have also won Tony Awards in some Broadway production.  But this list only looks at those which won or were nominated for the Tony for Best Play and Best Musical.

That 1976-77 season also included a Best Play winner – The Persecution and Assassination of Marat as Performed by the Inmates of the Asylum of Charenton under the Direction of the Marquis de Sade, which took home the silver medallion for Best Play in 1966.

Other Tony Best Play winners produced by the Rep have been:

Next season the Rep will produce Peter and the Starcatcher which was nominated for Best Play in 2012.  Other Best Play nominees produced by the Rep include: Barefoot in the Park; Broadway Bound; Cat on a Hot Tin Roof; Crimes of the Heart; Frost/Nixon; The Gin Game; Glengarry Glen Ross; Having Our Say; Home; Lend Me a Tenor; A Lesson from Aloes; ‘Night, Mother; The Night of the Iguana; Noises Off; The Piano Lesson; The Rainmaker; A Raisin in the Sun; The Retreat from Moscow; Talley’s Folly; The 39 Steps; and A Walk in the Woods.

The Rep also produced House of Blue Leaves six years before it was nominated for Best Play at the Tonys. In addition, it produced All My Sons which received a Special Tony for playwright Arthur Miller at the first ceremony and is sometimes erroneously listed as being the Best Play of 1947. There was none that year.

The 1971 Best Musical Company was part of the Rep’s inaugural season in 1976-77.  Other Tony Best Musicals winners produced by the Rep have been:

In addition, the Rep has produced staged concert versions of 1958 Best Musical The Music Man and 1973 Best Musical A Little Night Music in collaboration with the Arkansas Symphony Orchestra.

Next season the Rep will produce The 25th Annual Putnam County Spelling Bee which was nominated for Best Musical in 2005.  Other Best Musical nominees produced by the Rep include: The Best Little Whorehouse in Texas; Blues in the Night; Chicago; Dreamgirls; Five Guys Named Moe; The Full Monty; Gypsy; Into The Woods; Joseph and the Amazing Technicolor Dreamcoat; Mary Poppins;  Next to Normal; Oh What A Lovely War; Once On This Island; Peter Pan; Pump Boys and Dinettes; Quilters; Side by Side by Sondheim; Smokey Joe’s Café; Stop the World, I Want To Get Off; Sweet Charity; West Side Story; and The Who’s Tommy.