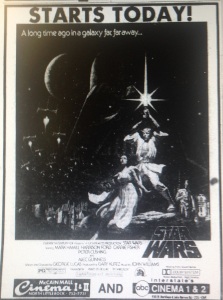 As a third grade boy, I remember devouring the novelized version of Star Wars in 1977. I read everything I could about the movie. I owned (and still have) the two disc London Symphony Orchestra soundtrack on LP.

I was a few months late to Star Wars figures, but Christmas of 1977 and birthday of 1978 did feature them as gifts. (I promptly lost my Sandcrawler weapon at my grandparents’ house on Christmas day.)

In those early days, I was excited by the idea of NINE Star Wars movies. Then, I gave up hope when George Lucas abandoned them after Return of the Jedi. When the prequels were announced during my adulthood, I was excited. Only to be disappointed by the actual movies (though admittedly they did get better by episode 3).

Then in 2015, the day my eighth grade self dreamed of, was here: what happens AFTER Return of the Jedi?  I saw The Force Awakens and flashed back to those early days. (Cynics might say it was because so much of Episode 7 was a retread of Episode 4.)  While 2017’s The Last Jedi may have disappointed or confused some fans, it offered many memorable moments.

And today: 42 years after it all began, (after sneak peeks last night), The Rise of Skywalker, the long promised ninth installment opens.

In honor of Star Wars: The Rise of Skywalker‘s opening day, here is a flash back to the Arkansas Gazette ad in June 1977 when the first film hit Little Rock (a full month after it first opened in New York).

It did not reach Little Rock until June 24, 1977. Given its status as a sleeper hit, it is no surprise that it came into Little Rock largely unnoticed.

In that day, major films opening on a Friday would be heralded the previous Sunday with a substantial advertisement. The first Star Wars ad ran on Thursday, June 23, 1977, the day before it opened. By contrast, Herbie Goes to Monte Carlo, which would play at the same theater, had a large ad on Sunday, June 19.

While Star Wars would seem like the perfect movie for the great UA Cinema 150, it did not play there. The film playing at the 150 was A Bridge Too Far, which was, at least an action movie. Star Wars did not even open at a UA theatre. It opened at the ABC Cinema 1 & 2 (located at Markham and John Barrow) and at the McCain Mall Cinema. (The ABC Cinema location is now home to discount cellphone and discount clothing businesses; a cinema has returned to McCain Mall but in a different location.)

The day it opened, there was a fairly large ad which incorporated the familiar beefcake Luke, Leia in flowing gowns, and Darth Vader mask. On the Sunday after it opened, there was a slightly smaller ad with the same artwork. McCain Mall also ran a small add for both Star Wars and Herbie. It noted that Star Wars was a film that management “does not recommend for children.”

As an epic battle for the fate of the galaxy approaches, the Empire quickly finishes construction on another Death Star battle station, and the Emperor himself soon arrives to personally oversee the operation. Rescuing Han Solo from his captor Jabba the Hutt, Princess Leia helps organize the Rebel attack and Luke Skywalker prepares for final confrontation with Darth Vader to prove himself a Jedi and perhaps bring out the good within his father’s soul.

This is the film which (SPOILER ALERT) Boba Fett dies.  It is also the movie in which Carrie Fisher had to wear a gold bikini.

Directed by Richard Marquand (selected by George Lucas), the film was nominated for four Oscars: Music (John Williams third nomination for the trilogy), Sound Effects, Sound, and Art Direction.  As had the first two films in the triad, it received a Special Oscar for Visual Effects.

Three years after the destruction of the Death Star, Imperial forces continue to pursue the Rebels. After the Rebellion’s defeat on the ice planet Hoth, Luke journeys to the planet Dagobah to train with Jedi Master Yoda, who has lived in hiding since the fall of the Republic. In an attempt to convert Luke to the dark side, Darth Vader lures young Skywalker into a trap at Cloud City. In the midst of a fierce lightsaber duel with the Sith Lord, Luke faces the startling revelation that the Vader is in fact his father.

This is the film which introduced Yoda and Boba Fett. It also showcased the smooth stylings of Billy Dee Williams.

The cast includes Mark Hamill, Carrie Fisher, Harrison Ford, Alec Guinness (in cameos), Anthony Daniels, Peter Mayhew, Kenny Baker, David Prowse, and the uncredited voice of James Earl Jones. Clive Revill provided the voice of the Emperor Palpatine (though in the re-edited version overseen by Lucas, Ian McDiarmid’s voice is used to match up with his appearance in subsequent films).

Directed by Irvin Kershner (selected by George Lucas), the film won one Oscar: Sound.  It also received a Special Oscar for Visual Effects.  It was nominated for Art Direction and for John Williams’ musical score.

Nineteen years after the formation of the Empire, Luke Skywalker is thrust into the struggle of the Rebel Alliance when he meets Obi-Wan Kenobi, who has lived for years in seclusion on the desert planet of Tatooine. Obi-Wan begins Luke’s Jedi training as Luke joins him on a daring mission to rescue the beautiful Rebel leader Princess Leia from the clutches of the evil Empire. And after Obi-Wan sacrifices himself in a lightsaber duel with his former apprentice, Darth Vader, Luke proves that the Force is with him by destroying the Empire’s dreaded Death Star.

Tonight is Episode 3 – Revenge of the Sith

In this 2005 film, three years after the onset of the Clone Wars, the noble Jedi Knights have been leading a massive clone army into a galaxy-wide battle against the Separatists. When the sinister Sith unveil a thousand-year-old plot to rule the galaxy, the Republic crumbles and from its ashes rises the evil Galactic Empire. Jedi hero Anakin Skywalker is seduced by the dark side of the Force to become the Emperor’s new apprentice – Darth Vader.

The Jedi are decimated, as Obi-Wan Kenobi and Jedi Master Yoda are forced into hiding. The only hope for the galaxy are Anakin’s own offspring – the twin children born in secrecy who will grow up to become Luke Skywalker and Princess Leia Organa.

Tonight is Episode 2 – Attack of the Clones

In this 2002 film, ten years after initially meeting, Anakin Skywalker shares a forbidden romance with Padmé Amidala, while Obi-Wan Kenobi investigates an assassination attempt on the senator and discovers a secret clone army crafted for the Jedi.

For six weeks this summer, the Central Arkansas Library System is showing the first six episodes of the STAR WARS saga on Thursday evenings.  They are being shown in episode order, not release order, or any of the other orders dreamed up by fans.

Tonight is Episode I – The Phantom Menace.

Stranded on the desert planet Tatooine after rescuing young Queen Amidala from the impending invasion of Naboo, Jedi apprentice Obi-Wan Kenobi and his Jedi Master discover nine-year-old Anakin Skywalker, a young slave unusually strong in the Force. Anakin wins a thrilling Podrace and with it his freedom as he leaves his home to be trained as a Jedi. The heroes return to Naboo where Anakin and the Queen face massive invasion forces while the two Jedi contend with a deadly foe named Darth Maul. Only then do they realize the invasion is merely the first step in a sinister scheme by the re-emergent forces of darkness known as the Sith.

The film that re-started the franchise was released 20 years ago.  Telling the backstory of some of the characters from the first trilogy, it starred Liam Neeson, Ewan McGregor, Natalie Portman, Ian McDiarmid, Anthony Daniels, Kenny Baker, Frank Oz, Terence Stamp, and Jake Lloyd.  Written and directed by George Lucas, it was nominated for three Oscars (Sound, Sound Effects Editing, and Visual Effects).