Tales of the Crypt – Spend an evening in Mount Holly Cemetery meeting its residents!

No, they aren’t ghosts. No, they don’t rattle chains or scare anyone. These residents are students from the Drama Department of Parkview Arts & Science Magnet High School in Little Rock.

Drama students research a person buried in Mount Holly. Then, on the second Tuesday evening of October, they dress in period costumes and deliver short monologues or dialogues to highlight the history and lives of their character.

Audiences are led through the cemetery by guides with candles, stopping at the graves where student actors are stationed. Many local teachers award extra credit to students who attend.

Over a thousand people attend Tales of the Crypt every year.

Admission is free to the public. We gladly accept donations!

The Arkansas Symphony Orchestra presents A Broadway Evening with Heather Headley, Saturday, October 5th at 7:30 p.m. in the Robinson Center. The ASO is proud to collaborate with Headley and her special guest, NBC’s The Voice finalist, Chris Mann. Headley and Mann will be joined on stage by the Parkview High School Lab Singers and Madrigals in Little Rock for one night only.

From her role as Broadway’s original Nala in The Lion King and her Tony Award-winning role as Aida in Elton John and Tim Rice’s Aida to her recurring role as Gwen Garrett on NBC’s Chicago Med, Headley is one of the most talented artists of this generation. In 2016 she returned to the Broadway stage as Shug Avery in the Tony Award-winning revival of The Color Purple.

On Wednesday, June 2, 1971, the final graduation took place for Horace Mann High School. Opened in the spring of 1956, it had served as Little Rock’s all African American high school for fifteen years. (Since the high schools reopened in August 1959, Central and Hall High had both been gradually increasing the number of African American students each year but students zoned for Mann continued to have the opportunity to attend that school.)

Two-hundred and forty students made up the final class. The graduation took place at Barton Coliseum on June 2.  Three days earlier, the Baccalaureate service took place at the school. The top graduate of the class was Samuel Ray Wilkins, with Eloise Wordlow ranked number two.

1971 marked the first graduating class at Little Rock’s newest high school, Parkview. The presence of that school helped hasten the end of Mann.  This was supposed to be the penultimate year for Mann, under the Little Rock School District’s plan. But in the summer of 1971, a federal court order mandated that Mann no longer serve as a one race high school effective the start of the 1971-1972 school year.

Because of the court order hastening the end of Mann as a high school, there was no opportunity to reflect on Mann’s legacy or note the final graduation.

So the group which thought they would be the final Mann class was instead split up to attend Central, Hall, and Parkview.  Mann was made into a junior high effective that new school year. The students who were supposed to be Mann’s last class have called themselves the 1972 Horace Mann Transitional Class and still have reunions.

Mann had followed Paul Laurence Dunbar High School as Little Rock’s African American high school. That facility had opened in 1929 with a junior high and junior college also in the same building.  Following the opening of Mann, Dunbar became solely a junior high.  The junior college component was dropped in 1955 with no publicly stated reason.

Prior to Dunbar, there had been Gibbs School which served as a primary and secondary school for Little Rock’s African American students beginning in the early 1900s. Eventually the elementary students were located in another building, which was the precursor to today’s Gibbs Elementary School.

Before Gibbs School, Capitol Hill and Union schools both existed at roughly the same time. Both included elementary, junior high, and high school students. After Gibbs School opened, they continued to serve as schools. Capitol Hill lasted as an elementary school into the 1940s.

On the last Sunday of every April the supporters and friends of Mount Holly gather in the cemetery from 5-7 p.m. for a picnic, silent auction, and entertainment. Funds raised at the picnic help maintain the cemetery as a beautiful historic landmark.

Tickets are $75.00 for adults, $25.00 for children under 18. Purchase tickets online through Eventbrite.com

The Little Rock School District’s annual celebration of the arts in the schools, Artistry in the Rock starts today and runs through Friday, March 15.

It is in a new location this year: Arkansas State Fairgrounds Hall of Industry Building.

A celebration and showcase of LRSD student talent in the performing & visual arts. FREE and Open to the Public! 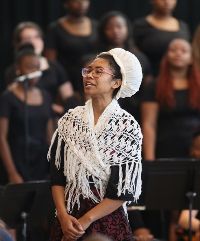 Each year, the Clinton Center celebrates Black History Month with a historically-rooted performance by the drama, choir, and orchestra students from Parkview Arts and Science Magnet High School.

The program will begin at 3pm in the Clinton Center Great Hall.

The theme of River of Change follows the focus of FUSION 2019: Arts+Humanities Arkansas by focusing on the Mississippi River.

Arthur Lee (Art) Porter Sr. was a pianist, composer, conductor, and music teacher. His musical interest spanned from jazz to classical and spirituals.

Tonight at the CALS Ron Robinson Theatre, Arkansas Sounds is hosting a special presentation of rare video and audio clips and photographs, as well as a panel discussion celebrating the continued legacy and eighty-fifth birthday of Arkansas pianist, composer, conductor, and music teacher Art Porter Sr. This event is co-sponsored by AETN.

Admission is free, but reservations are suggested. They can be made here.

Born on February 8, 1934 in Little Rock, he began his music education at home. He played in church at age eight; played his first recital at twelve; and, by fourteen, hosted a half-hour classical music radio program on KLRA-AM. He earned a bachelor’s degree in music from Arkansas AM&N College (now UAPB) in May 1954.

He began his teaching career at Mississippi Valley State University in 1954.  When he was drafted into the Army, his musical talents were responsible for him being assigned as a chaplain’s assistant in New York.  In the late 1950s he returned to Little Rock and taught at Horace Mann High School, Parkview High School and Philander Smith College.

He also started playing piano jazz in the evenings. This led to the creation of the Art Porter Trio, which became THE music group for events.  Many musicians who came to Arkansas to perform in Little Rock or Hot Springs would often stop by and join in with Porter as he played.  From 1971 to 1981 he hosted The Minor Key musical showcase on AETN.  His Porterhouse Cuts program was shown in 13 states.

Often encouraged to tour, he instead chose to stay based in Arkansas.  He did, from time time, perform at jazz or music festivals.   He also performed classical piano with the Arkansas Symphony Orchestra, founded the Art Porter Singers, and created a music group featuring his four oldest children.  Though Porter received many honors and awards, he found particular satisfaction in the “Art Porter Bill” enacted by the state legislature, which allowed minors to perform in clubs while under adult supervision. Porter’s children thus were able to perform with him throughout the state. Governor Bill Clinton, at the time a huge fan and friend of Porter, often joined Porter’s group on his saxophone.

In January 1993, Porter and his son Art Porter, Jr., performed at festivities in Washington DC for the Presidential Inauguration of his friend Bill Clinton.  In July 1993, he died of lung cancer.  Today his legacy lives on in the Art Porter Music Education Fund as well as in the lives of the many musicians and fans he touched.  He was posthumously inducted into the Arkansas Black Hall of Fame in 1994.