October is Arts and Humanities Month nationally and in Little Rock. Americans for the Arts has identified a different arts topic to be posted for each day in the month. Today’s focus is photography.

While Little Rock has many photographers of whom I very fond, I have chosen to highlight an image taken by Ernest Withers in September 1957. A copy of this photo is in the collection of the Smithsonian National Museum of African American History and Culture as well as the Museum of Fine Arts, Houston.

It depicts several members of the Little Rock Nine getting out of the car on September 25, 1957, their first day of school. On one hand, it is typical of teenagers then, and now. They are carrying assignments and their books.  One of them has dropped something and is bent over to pick it up.  It appears to be from left to right, Carlotta Walls, Melba Pattillo, Elizabeth Eckford, and Minnijean Brown.

But on the other hand, the photo is anything but typical. They are being escorted by soldiers. Crowds of people are amassed on the front steps watching it all unfold. The rest of the street by the car is bare.

History was about to be made.

Dave Anderson is an award-winning cross media storyteller best known for his work behind the lens. His photography and films have been exhibited, published, screened and lauded across the planet.  Anderson’s work has been profiled on numerous media outlets ranging from Good Morning America to The New York Times to The New Yorker, where Vince Aletti called Anderson’s photography “as clear-eyed and unsentimental as it is soulful and sympathetic.” NPR praised his films, saying they are, “in short…awesome.”

In addition to being a photographer and filmmaker, he currently serves as Winrock International’s Director of Communications and Public Affairs.  Previously Anderson worked as an adviser in the Bill Clinton White House and later oversaw MTV’s road-tripping multimedia election extravaganza, the Choose or Lose Bus, which traveled to 47 states and helped register over 250,000 young people to vote. He has spearheaded content and strategic media efforts for the White House, the U.S. Department of State, Viacom, New York University and Heifer International, among others. Anderson has shot and directed over 50 short films. His photographs can be found in the collections of museums and galleries in the United States and abroad, and have been exhibited across Europe, Asia and the U.S. His editorial photography has been featured in the pages of Esquire, Smithsonian and Time among other publications. His long-running video series SoLost (for the Oxford American) won a National Magazine Award, and he has been recognized by the National Association of Black Journalists. 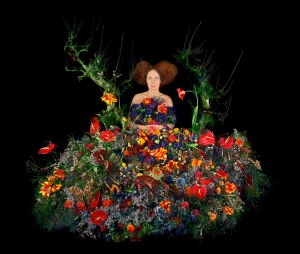 Nathalia Edenmont: Force of Nature is the artist’s first solo exhibition in a major American museum and features ten, richly colored, large-format photographs. Five of the photographs, including Eden, a self-portrait of the artist, are recent works and have never before been exhibited. Force of Nature is organized by the Arkansas Arts Center and Nancy Hoffman Gallery (New York City) and is presented in conjunction with the Garden Club of America Zone 9 annual meeting, which occurs in Little Rock in late-April 2016.

“Nathalia Edenmont’s photos are striking both in terms of their scale and colorful content,” said Brian J. Lang, chief curator and curator of contemporary craft at the Arkansas Arts Center. “We look forward to hosting Edenmont’s first major U.S. exhibition, giving Arkansans the opportunity to be among the first to see some of her most recent photos.”

Born in 1970 in Yalta, Ukraine, Nathalia Edenmont moved to Sweden by the age of 20, realizing that life in the former Soviet Union was disintegrating and held no future for her. At 27, Edenmont enrolled in the Forsbergs Skola to study graphic design. At the school her artist-mentor, Per Hüttner, encouraged her to visualize her inner pictures and to try to capture them with the camera.

All of Edenmont’s photographs derive from her life experience. “I only look inside my head,” the artist explains. “What I see in my mind is what I create. I do not sketch; the image is complete and sharp within me. I have absolute control over all aspects of what I do.”

Using a large-format Sinar camera with 8×10 film and many lenses, Edenmont works with a team of eight to twelve people over the course of one day to compose a single “shot.” She has two camera assistants (both professional photographers), a hair stylist and a dressmaker.

What each figure wears is central to the meaning of each work. The artist’s “portraits” reflect intensity, each subject stands expressionless and motionless against a pitch-black background, cloaked in flowers revealing only her neck and shoulders; light emanates from within. It is the “flower pile” or dress the artist composes that tells the tale, sometimes with birds or snakes, sometimes with fresh flowers or vegetables, and at other times with wilted blooms. “Since my childhood I have heard that a woman’s beauty is like a flower, it passes quickly,” Edenmont says. “That is why I switch from fresh flowers to dry and very old. I see much beauty in dried flowers. I grew up as a Russian Orthodox and in the cemetery the fresh graves covered in flowers looked like my flower piles from which I compose my dresses.”

Edenmont is a two-time recipient of the Konstnarsnamndens Arbetsstipendium, a grant awarded by the Culture Department in Stockholm, Sweden. Her work has been exhibited internationally, including museums in Sweden, Russia and Germany; Nathalia Edenmont: Force of Nature is the artist’s first solo exhibition in a major American museum.

Edenmont will speak at an AAC Member Lecture & Late Night event at 6 p.m. on Thursday, January 21. A book signing will immediately follow the lecture.

Nathalia Edenmont: Force of Nature is sponsored by Tipton & Hurst, Kara and David Dowers for Annie Dowers and Dr. and Mrs. Charles Cole.

In recognition of the 10th anniversary of Hurricane Katrina, Christ Episcopal Church in downtown Little Rock is showing a collection of Dave Anderson’s One Block photos.

Little Rock photographer Dave Anderson followed the reconstruction of a single block in New Orleans from 2006 to 2010. This delivers a powerful portrait of the storm’s ongoing physical and psychological impact on a neighborhood and its residents.

Using portraiture, still lifes and abstract images, Anderson’s photos document the evolution of both the street and its houses as residents literally rebuild their lives, exploring the very nature of community while testing its resilience. Anderson’s compassionate treatment of the neighborhood’s straitened financial circumstances and its courageous reconstruction has drawn comparisons to coverage of the Great Depression by Dorothea Lange, Walker Evans and other Farm Security Administration-funded photographers.

Seventy years later, between the devastation left by Katrina and the current housing crisis, the stability and permanence of the American home are once again in jeopardy, lending Anderson’s record a heightened, timely pertinence. One Block is an extension of Anderson’s optimistic belief that the good within each of us is what unites us, as well as his hope that this commonality will afford us the grace to both endure and emerge from our current turmoil.

Copies of Anderson’s book One Block are available for purchase at the church.

In a world before motion pictures and color photographs, stereoscopic photography captured the attention of millions. These affordable 3-D images created a phenomenon that spanned the last half of the nineteenth century, bridged demographic and socioeconomic gaps and provoked discussions about the nature of reality and truth, science and art.

Unlike traditional studio photographers, stereo photographers took their cameras outdoors to capture life as it occurred, giving a documentary quality to many of the images.

Today, stereographs serve as a meaningful source for studying the 1800s.  In Arkansas, these views are a window into the growth of a young state, early tourism, railroad expansion and a unique culture and people.

Capturing Early Arkansas in Depth continues in the Arkansas Made Gallery through April 5, 2015. 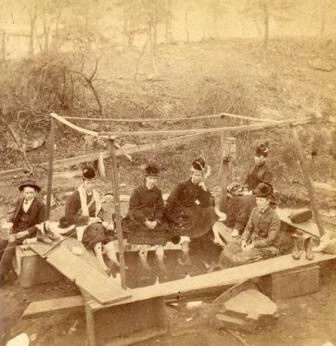 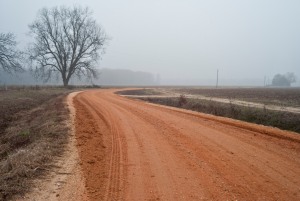 Wilmot is a little town in Ashley County, in southeast Arkansas. . . .A few years ago, Susan Paulsen set out to tell a kind of story, to chronicle a place in Arkansas through evocative photographs taken there over the course of many visits, in all seasons of the year. . . . Together, they form a picture of a place. For the artist, that place has a personal importance—part of her family comes from there, and for generations it has been a kind of homing place for them. Through her photographs of this particular place, she wants, as she has said, to make a sort of poem about all such places; to find commonalities among these individuals and people in other places. Her goal, from the outset, has been to evoke all the Wilmots, wherever they might be. But still there is this town, these people. . .”  –

They will be on view in the Townsend Wolfe Gallery until September 28, 2014.

The heat of summer has returned.  This is a good time to enjoy the cooling setting of a museum. Summer is also an appropriate time to journey to yesteryear, to a time and a place of a slower pace.

Wilmot is a little town in Ashley County, in southeast Arkansas. . . . A few years ago, Susan Paulsen set out to tell a kind of story, to chronicle a place in Arkansas through evocative photographs taken there over the course of many visits, in all seasons of the year. . . . Together, they form a picture of a place. For the artist, that place has a personal importance—part of her family comes from there, and for generations it has been a kind of homing place for them.

Through her photographs of this particular place, she wants, as she has said, to make a sort of poem about all such places; to find commonalities among these individuals and people in other places. Her goal, from the outset, has been to evoke all the Wilmots, wherever they might be. But still there is this town, these people. . .”  – From the essay by George T. M. Shackelford, Susan Paulsen: Wilmot.

The evocative visual poetry of Susan Paulsen: Wilmot comes to the Arkansas Arts Center in the form of more than 70 photographic prints and groupings of photographs that she took in Wilmot, Arkansas between 1995 and 2012. Most spectacularly, one large wall is covered by a grid of 90 photographs.

Susan Paulsen: Wilmot was organized by Maison européenne de la photographie, Paris. The images are coming home to Arkansas for their American debut. They will be on view in the Townsend Wolfe Gallery until September 28, 2014.