The Britts, Rockefellers and Hammerschmidts

Fifty years ago today was Election Day 1966. It was a seismic election for Arkansas. Winthrop Rockefeller was chosen as Arkansas’ 37th Governor, defeating Jim Johnson. (An earlier version of this incorrectly listed Jim’s wife, Virginia.  She would run for the Democratic primary in 1968, losing to Marion Crank.) In addition, Maurice “Footsie” Britt was elected Lieutenant Governor, Joe Purcell was chosen as Attorney General, and John Paul Hammerschmidt & David Pryor were both new faces in the Arkansas congressional delegation.

Rockefeller, Britt, and Hammerschmidt made waves as the first Republicans to hold those offices since Reconstruction.  But perhaps more importantly, when joined by Pryor and Purcell, the five represented a new face and outlook on Arkansas politics. They were progressive and centrist. They saw a different role for government in social and moral questions.

This election set the stage for Arkansas of the 1970s and 1980s. It was a repudiation of the overtly racist Faubus-era political old guard.  It was certainly not the end, however. In the 1968, 1970 and 1972 elections, Faubus and his cronies would try to reassert themselves in statewide races and would continue to see allies win local races.

But it would be the 1966 election which marked a turning point in Arkansas politics.

On January 7, 1910, one of the most controversial figures in Arkansas history was born: future Governor Orval Eugene Faubus.

Faubus is today remembered for his role fighting for the continued segregation of the Little Rock public schools.  Raised in a socialist family, his staunch embrace of segregation was a surprise to many who viewed him as more of a moderate on the issue.  At the time, and later, it was viewed as more of an opportunistic move to head off a political challenge from segregationists such as Jim Johnson.  However, throughout the rest of his lifetime, as others such as George Wallace would recant and repent, Faubus continued to maintain he was “merely” upholding the law of the land (the Supreme Court striking down the law a few years earlier, notwithstanding).

Interestingly, Faubus was also known for hiring African Americans in state government for more than menial tasks. He worked to increase funding to historically black colleges and universities in Arkansas. He fought to abolish the predatory poll tax.

His segregation efforts curtailed Arkansas’ business recruitment for a few years in the late 50s and early 60s.  But a few years earlier, in 1955 Faubus had created the Arkansas Industrial Development Commission and appointed Winthrop Rockefeller to lead it.  He also increased teacher pay, overhauled the State Hospital, created the Arkansas Children’s Colony, expanded state parks, and stopped the Army Corps of Engineers from damming the Buffalo River.

In late 1965, by executive order, he created the Arkansas Arts and Humanities Council and funded it with his discretionary funds until the legislature would appropriate money in 1967. He also oversaw the creation of the state’s historic preservation program.

Certainly his efforts to flout federal law have tarnished his image. Looking at his accomplishments in the areas of industry, education reform and culture – one wonders what he could have accomplished if he had exerted even more efforts in those areas instead of fighting Eisenhower.  It is all moot, because he did not.  And the reality is that, yes had he supported Eisenhower, he might well have lost in 1958 to someone like Jim Johnson who would have continued fighting for segregation even more vehemently and would have been unlikely to champion these other issues. 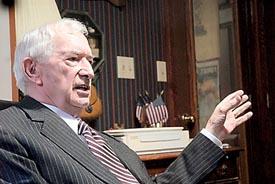 Arkansas Senator and state Supreme Court Justice, James D. “Jim” Johnson has been portrayed as one of the most outspoken racist politicians of Arkansas’s history. His legacy includes an Amendment to the Arkansas Constitution that gave Arkansas the right to nullify federal law. He is also remembered for being a constant thorn in the side of Governor Orval Faubus.

A look at the evidence surrounding Johnson’s political career suggests that Johnson was not purely motivated by race. Johnson started the White Citizens’ Council of Arkansas in 1955 in response to the integration of the Hoxie School District. Hoxie became Johnson’s soapbox and the Citizens’ Council became his campaign vehicle. The tactics he used to fight integration in Hoxie were unlike those of other Arkansas segregationists. Instead of citing race as the reason for his campaign in Hoxie, Johnson brought the Second Red Scare to Arkansas. He appealed to a wider audience by accusing integrationists of being communists.

Using primary source information, this presentation outlines the methods used by Johnson in 1955 as he started his campaign for governor. Marie Williams is currently finishing her Master’s Degree in History from Arkansas Tech University. She is an Arkansas native who lives in Dover with her husband and their two children.