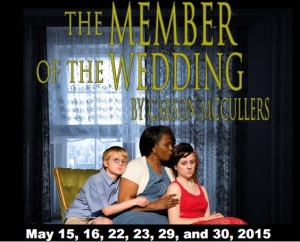 Next at the Weekend Theater is The Member of the Wedding, Carson McCullers unflinching yet heart-warming look back at the transition from childhood to adulthood.

Winner of the New York Drama Critics’ Circle Award and the Donaldson Award in 1950 for best play, The Member of the Wedding is based on the Carson McCullers multi-award winning novel by the same name. The play set during World War II takes place over a few days in late August, 1945.

It tells the poignant story of 12-year-old tomboy, Frankie Addams, who, like many prepubescents, feels disconnected from everything in the world; in her words, an “unjoined person.” Frankie’s mother has died in childbirth, and her widowed father is a distant, vacuous figure who has no idea of the anxiety his daughter is experiencing. Her closest companions in her small racially divided hometown are the family’s African American housekeeper and surrogate mother to Frankie, Berenice Sadie Brown, and her six-year-old pesky cousin, John Henry West. She has no other friends in her deeply southern birthplace and dreams of going away with her soldier brother and his bride-to-be on their honeymoon in the Alaskan wilderness. Frankie Addams desperately wants to become “joined” with the newlyweds in The Member of the Wedding.

Directed by Margaret Pierson Bates, the production opens tonight and runs through May 30 on Friday and Saturday evenings. 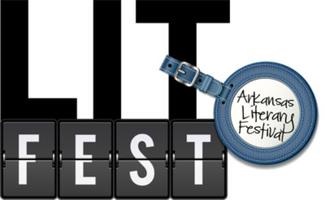 Today is the busiest day of the 11th annual Arkansas Literary Festival. Unless otherwise specified the events are free.

Highlights for today are:

The Weekend Theater’s production of The River Niger wraps up its run this weekend.  You can still catch the play tonight and tomorrow at 7:30pm.

Winner of a 1973 Obie Award and the 1974 Tony Award for Best Play, The River Niger explores three generations of an American family.  Set in the Black Power 1970s, Joseph A. Walker’s play is full of both tragedy and comedy that is interwoven with the attempt of a revolutionary group to bomb a government target.

Johnny Williams, the father, is a housepainter and poet who lives in Harlem with his no-nonsense wife and inebriated mother-in-law. But his pride and joy is his son Jeff, an officer in the Air Force. Jeff’s return to his family and neighborhood precipitates explosive crises. What is true revolution? Where are the real battlefields? Provoking comparisons about the fight for racial justice then and now through unforgettable characters and scenes, this play is sure to entertain and educate diverse viewers about family, love, and making a proactive stand for what is right.