Science After Dark is Coming…on Thursday, April 25.
When you play this game of thrones, you win (you won’t die…you’re welcome.) Brace yourself for an evening of adventure in fantasy as we explore some of the science behind your favorite show. Admission is $5 or free for members. You must be at least 21 to enter.

Tickets are $5 or free for members and may be purchased at the door or online at https://museumofdiscovery.org/event/april2019/. Each Science After Dark, we will support a local charity and this month we are accepting donations for Arkansas Foodbank. You can also sign up to volunteer with us at the Foodbank on Tuesday, June 11 from 6-8 p.m. at http://cerv.is/m?0334gpyrxNj! 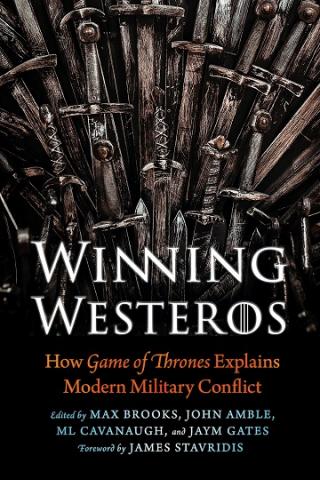 Who will claim the Iron Throne and why? On the eve of the premiere of the final season of Game of Thrones, M.L. Cavanaugh’s new book brings together 30 expert strategists to answer that question and engage in questions surrounding the most popular television series of our time.

As characters battle for power and control, there is magic and witchcraft, fiery dragons, frozen zombies, chaotic combat, swordplay and brutal intrigue, creating one of the most intense worldwide strategy plotlines in contemporary television.

By applying the theories of our actual world to the examples in fictional Westeros, including Tyrion Lannister’s unlikely success, Daenerys Targaryen’s fire-strafing dragons and Jon Snow’s abilities as a leader, Cavanaugh will discern the fascinating connections between George R. R. Martin’s fantasy world and real war and politics.

Cavanaugh is an active duty Army Strategist with experience in 11 countries and assignments ranging from the Pentagon to Strategic Command and Iraq to West Point. He is the youngest recipient of the U.S. Military Strategists Association’s professional award, the Order of Saint Gabriel the Archangel (2015), in addition to earning West Point’s faculty-wide Apgar Award for Excellence in Teaching (2014), and being named the U.S. Army’s Athlete of the Year (2009).

A Founding Member of the Military Writers Guild, Cavanaugh is a Non-Resident Fellow and co-founder of the Modern War Institute at West Point.

Fans of superheroes, Game of Thrones, Doctor Who, Harry Potter, comics, and gaming will converge on the Central Arkansas Library System’s (CALS) 2nd Annual CALS Con on Saturday, May 30, from 9 a.m.-5 p.m on the Main Library campus, 100 Rock Street. All CALS Con events are free and open to the public.

CALS Con is a family-friendly celebration of all things fandom. The event kicks off the library’s 2015 superhero-themed Summer Reading Club, Every Hero Has a Story. Fans of all ages may come dressed as their favorite character. The day will include six panels, a social media scavenger hunt, table top gaming, LEGO display and open building, drop-in gaming area, and a meet up area. The first 700 people to register for the event will receive a special CALS Con swag bag.

CALS Con will conclude with a cosplay contest at the CALS Ron Robinson Theater, 100 River Market Avenue. Attendees are encouraged to post about their CALS Con experience on social media using #CALScon2015.