Baxter Knowlton has painted hundreds of commissioned portraits for people all across the country. Come see his latest show: Arkansas Figures. The paintings in this show are portraits of only a few of the Arkansans he admires.

Bonus: there will be eats, drinks, and Isaac Alexander will be spinning tunes.

The exhibit will continue through March 31.  The artwork is available for purchase. 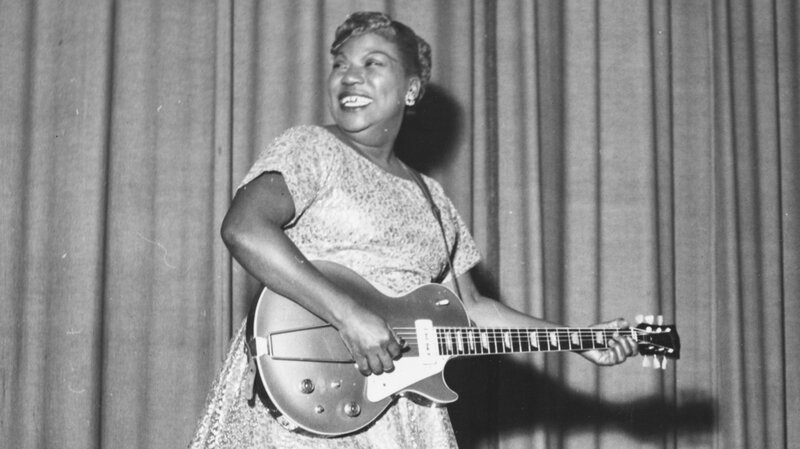 Tonight (March 20) at 7pm at the Ron Robinson Theater. Celebrate the life, legacy and love of Sister Rosetta Tharpe.

The director’s cut of the American Masters documentary profiles the newly inducted Rock & Roll Hall of Fame member Sister Rosetta Tharpe, paying tribute to the Arkansas musical legend on what would be her 104th birthday. This longer version features more performance footage and a special introduction by filmmaker Mick Csaky.

Presented by Arkansas Sounds and AETN/PBS.

The new Arkansas Civil Rights History Audio Tour was launched in November 2015. Produced by the City of Little Rock and the University of Arkansas at Little Rock allows the many places and stories of the City’s Civil Rights history to come to life an interactive tour.  This month, during Black History Month, the Culture Vulture looks at some of the stops on this tour which focus on African American history.

The UALR Center for Arkansas History and Culture contains extensive archives, including virtual exhibits relating to the Civil War, Gov. Winthrop Rockefeller, and the city of Little Rock. Adding another dimension to the struggle for civil rights are documents and art from the World War II Japanese American Relocation Camps at Rohwer and Jerome, Arkansas, and two large Jewish history collections.

The app, funded by a generous grant from the Arkansas Humanities Council, was a collaboration among UALR’s Institute on Race and Ethnicity, the City of Little Rock, the Mayor’s Tourism Commission, and KUAR, UALR’s public radio station, with assistance from the Little Rock Convention and Visitors Bureau.

Tonight at 7pm at the CALS Ron Robinson Theater, Arkansas Sounds presents a detailed look at the life of Sister Rosetta Tharpe with a screening of The Godmother of Rock and Roll and a tribute mini-concert of her songs.

Arkansas native Rosetta Nubin Tharpe (Sister Rosetta Tharpe) was one of gospel music’s first superstars, the first gospel performer to record for a major record label (Decca), and one of the first artists to cross over from gospel to secular music. Tharpe has been cited as an influence by numerous musicians, including Bob Dylan, Little Richard, Elvis Presley, and Arkansan Johnny Cash.

In partnership with AETN, Arkansas Sounds will celebrate the 100th anniversary of her birth with a screening of the PBS American Masters documentary The Godmother of Rock and Roll, followed by a musical tribute performance of her songs.